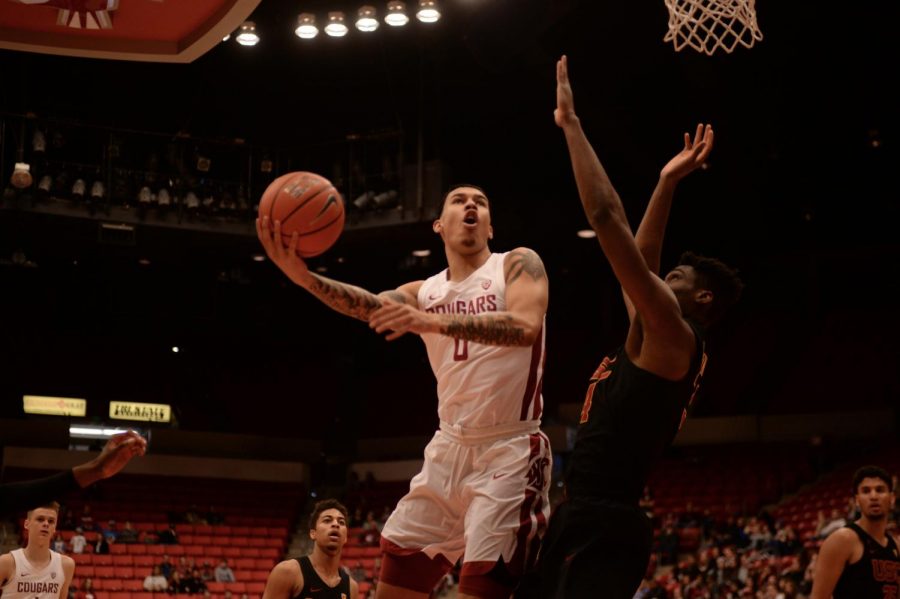 Junior power forward Isaiah Wade attempts score a layup over a USC defender during a game against USC on Saturday at Beasley Coliseum.

WSU men’s basketball stunned Arizona State 91-70 on Thursday night in Tempe to collect its first road win of the season and end a five-game losing streak.

Senior forward Robert Franks led the Cougars (9-14, 2-8) with 34 points and 13 rebounds. He also knocked down five of the team’s 12 three-pointers in the game.

The Cougars failed to make a shot until the third minute of the contest but they were able to draw a couple of shooting fouls and take an early 8-6 lead against the Sun Devils (15-7, 6-4).

WSU managed to play consistent through the early minutes of the half as they took a 19-12 lead.

Just over halfway through the first half, ASU fans were silenced as Franks already had 10 points and WSU had a 27-17 lead.

Nearing the end of the opening 20 minutes, the Cougars looked like the team fans saw in the early parts of the season. They were shooting over 50 percent from the three-point line with five minutes left in the half, as freshman forward CJ Elleby and Franks were paving the way for a win.

ASU looked stunned as the Cougs took a 50-33 lead into halftime. Both teams started the second half slow as they each scored four points apiece five minutes in.

Sun Devils fans were shocked as the second place Pac-12 team was losing by 22 points to the conference’s 11th place squad with just under 10 minutes left.

WSU held strong throughout the second half to pick up its second conference victory of the season.

The Sun Devils shot a bleak 15 percent from the three-point line in their worst loss this season. Meanwhile, the Cougars hit 40 percent of their shots from beyond the arc and had 22 assists.

WSU now travels south to Tucson to take on Arizona 4:30 p.m. Saturday. The game can also be seen live on Pac-12 Networks.