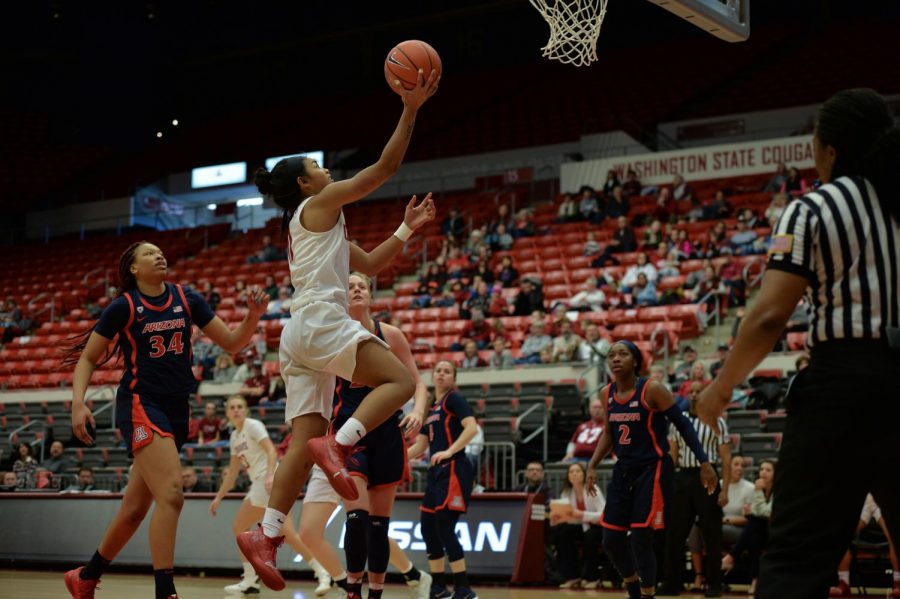 Junior guard Chanelle Molina leaps up towards the basket in the game against Arizona on Saturday at Beasley Coliseum.

“I thought this was one of our better games,” Ethridge said. “Things that we wanted to do before this game and for this game I thought we [did] really good.”

WSU controlled the last three minutes of the first quarter as Molina scored four more points and Hristova added a layup. In the last three seconds of the quarter, senior guard Alexys Swedlund hit a three-pointer to put the Cougars up 18-15 after 10 minutes.

To start the second quarter, Borislava hit two free throws and converted four layups. However, Arizona stayed in the fight and went back and forth with WSU. There was a total of six lead changes in the quarter but the Cougars took a 42-38 lead into halftime.

The two teams traded baskets to start the second half but WSU held the lead. Hristova scored 12 points while on the opposite of the court redshirt sophomore guard Aari McDonald kept the Wildcats in the game.

“I just wanted to be aggressive,” Hristova said. “I saw the shots were going in so I kept being aggressive.”

Gaining a 65-58 lead at the end of the third, the Cougars didn’t take any breaks offensively in the final frame as Molina and Hristova each scored a layup. WSU extended its lead to a comfortable 69-58, but the Wildcats had junior guard Lucia Alonso who hit four three-pointers in the final quarter.

On the other end, McDonald was pushing and pressing hard on defense, but as her energy rose so did the Cougars’ and the two teams kept scoring.

The game ended with constant drawn fouls against Hristova, who shot 8-10 from the free-throw line in the game.

In the last five seconds, the Wildcats trailed 90-88 as McDonald took the ball and rushed to the three-point line where she threw up a shot. The ball was tipped after its release resulting in an air-ball with no foul being drawn. The crowd in Beasley roared as the Cougars finally picked up their third conference win.

After her team’s performance, Ethridge is looking forward to the rest of the season.

“I want our team to really continue to improve this month,” Ethridge said. “I want to see us playing our best basketball in March so we still have a lot of work to do.”

The Cougars return to action 7 p.m. Friday to face rival University of Washington at Beasley Coliseum. WSU won the first matchup with the Huskies this season 79-76.