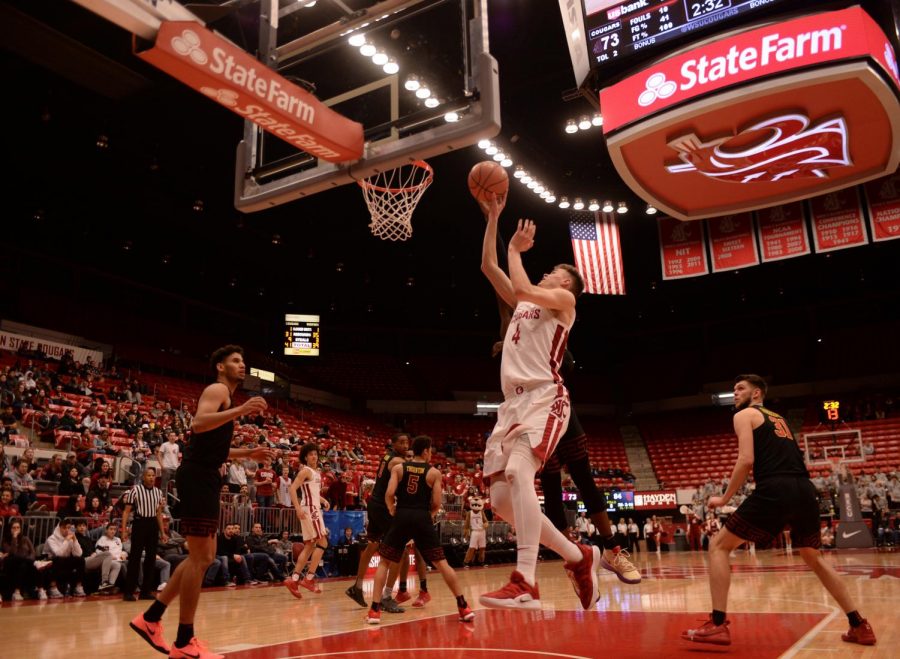 Then-freshman small forward Aljaz Kunc leaps as he shoots for the net during the game against USC on Feb. 2, 2019 at Beasley Coliseum.

WSU men’s basketball led the entire game in a 69-55 win over Arizona on Saturday in Tucson, Arizona.

The Cougars (10-14, 3-8) swept the Arizona schools on the road for the third time since the schools were added to the Pac-12. The two times prior were during the 1981-82 and 2006-07 seasons. This victory is also the first time since 2010 that the Cougars have beat the Wildcats in Arizona.

WSU is the first team since 1995 to defeat both Arizona and Arizona State by double digits on the road in a season.

The Cougars got on the board first just over a minute into the game on a three-pointer by freshman forward CJ Elleby. The Cougars held the Wildcats scoreless over five and a half minutes, giving WSU a 10-0 lead before Arizona (14-10, 5-6) got on the board.

About halfway through the first half, WSU led 15-7. The Cougars finished the first half on a three-pointer by senior forward Robert Franks at the buzzer to give the Cougars a 33-21 lead.

Franks led the team with 20 points at halftime. Franks nearly finished with more points than the Wildcats in the first half.

With under 13 minutes to play the Cougars had a 16 point lead. WSU kept its double-digit lead throughout the second half until nine minutes left to play when Arizona started making a comeback and got within nine points.

With eight minutes left in the game, Elleby was fouled at the three-point line. He would make all three free throws to give WSU a double-digit lead once again.

With 1:11 left in the game, Franks hit a three-pointer to put the Cougars up 69-53 leaving Arizona to only score once more before the time expired.

Franks finished the game with 31 points, hitting 7-9 of his shots from behind the three-point line. He scored a combined 68 points on the Cougars two-game road trip to Arizona.

The Cougars look to keep their two-game winning streak alive when they return home to host rival University of Washington 5 p.m. next Saturday in Beasley Coliseum. The game can also be seen live on ESPNU.