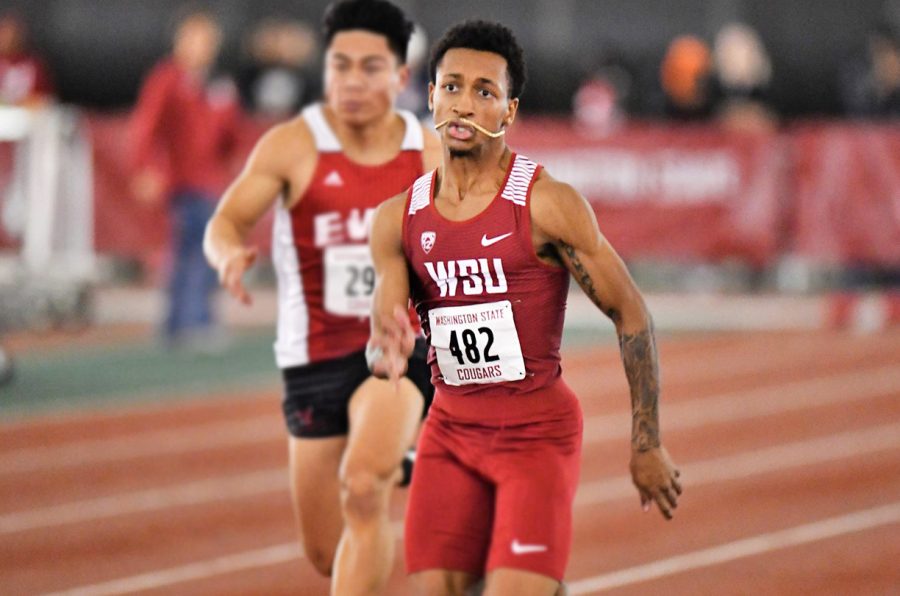 Junior Emmanuel Wells Jr. competes in the 60-meter dash at the WSU Indoor on Jan. 19 in the Indoor Practice Facility.

Junior Emmanuel Wells Jr. made history Saturday in Albuquerque, New Mexico, running a blistering 6.55 seconds in the 60-meter dash when WSU track and field competed in a pair of meets this weekend.

Wells time is the fastest in WSU history and third best in the NCAA this season. His time unadjusted for the altitude was 6.53, which is currently tied for the second fastest in the world. His astonishing pace is also the 12th-fastest all-time in collegiate history.

The Cougars split their team to compete in the Husky Classic in Seattle on Friday and the Don Kirby Elite in New Mexico on Saturday.

The meet in Seattle had to be condensed from a two-day event into one because of a snowstorm that was moving into the area.

On the women’s side, freshmen Suzy Pace led the way taking home first in the high jump with a height of 5 feet 8 inches. Senior Katelyn Frost also established a new personal record in the pole vault with a mark of 12 feet 6 3/4 inches to finish fourth.

The men’s team was led by senior Peyton Fredrickson, who placed second in the high jump with a mark of 6 feet 11 inches.

In Albuquerque, the records continued to pile up for the Cougars as freshman Charisma Taylor broke the WSU freshman indoor record in the women’s 60 meter hurdles with a time of 8.30. The record-breaking performance was good for eighth place in the event and Taylor also claimed sixth in the triple jump and 10th in the long jump.

Junior Jordyn Tucker sprinted to sixth in the women’s 60-meter dash, running a 7.56.

But the most impressive performance came from Wells who finished .08 seconds ahead of Oregon’s Cravon Gillespie in the men’s 60-meter to obliterate the WSU record books.

Sophomore Jake Ulrich showcased his speed as well by placing third in the men’s 400-meter with a time of 47.03.

The Cougars will compete in the Last Chance College Elite on Friday at the Dempsey Indoor in Seattle before taking part in the Mountain Pacific Sports Federation Indoor Championships on Feb. 22 and 23.