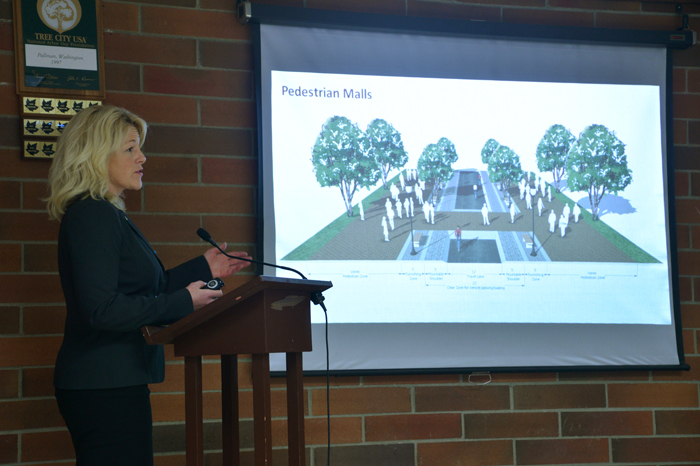 Pullman and WSU are implementing plans to make the community safer for pedestrians and cyclists.

The WSU transportation services director spoke before the Pullman City Council on Tuesday, detailing plans on how to establish a safer campus environment for Cougar cyclists and pedestrians.

Council members listened and asked questions of Bridgette Brady, the WSU director of transportation services, who presented potential options to achieve smoother modes of transportation through the WSU campus.

In 2013, WSU held various public workshops to give members of the community a say in recommending additions or changes to common routes of travel within the campus area.

“They were highly attended and we got a lot of great feedback,” she said.

More than 40 engineering transportation system recommendations have been allocated toward the implementation phase, Brady said.

Brady explained the five E’s encompass the overall theme of pushing for construction of better paths people use on a daily basis.

“We want to make sure that our efforts are useful,” she said.

Mayor Glenn Johnson noted a concern for major passages on the WSU campus, saying cyclists and walkers regularly pass by each other.

Glenn Terrell Mall is one of many major pedestrian walkways the university plans to enhance. Brady said it would benefit both pedestrians and cyclists if visible separation zones were created to avoid possible accidents.

“The recommendation for Stadium Way well into the future would be two-lane travel, bicycle lanes on either side, which would keep cyclists off the sidewalk for the pedestrians,” Brady said.

Councilman Nathan Weller asked whether the transportation improvements would include a direct route to the city of Colfax.

Brady said so far there are no recommendations, as the plan deals primarily with the WSU campus. However, Weller commended Brady for the amount of progress made on the planning phase of the project.

“Seeing it develop over the time is absolutely amazing,” Weller said.

Brady said widening the 5-foot sidewalk to 10 feet at the Northwest Davis Way trail gap to match the width of the existing side path could establish a safer method of transportation for pedestrians and cyclists.

Pullman residents would contribute to funding the project in addition to the application of state grants. The funding process would take about 20 years, Brady said.