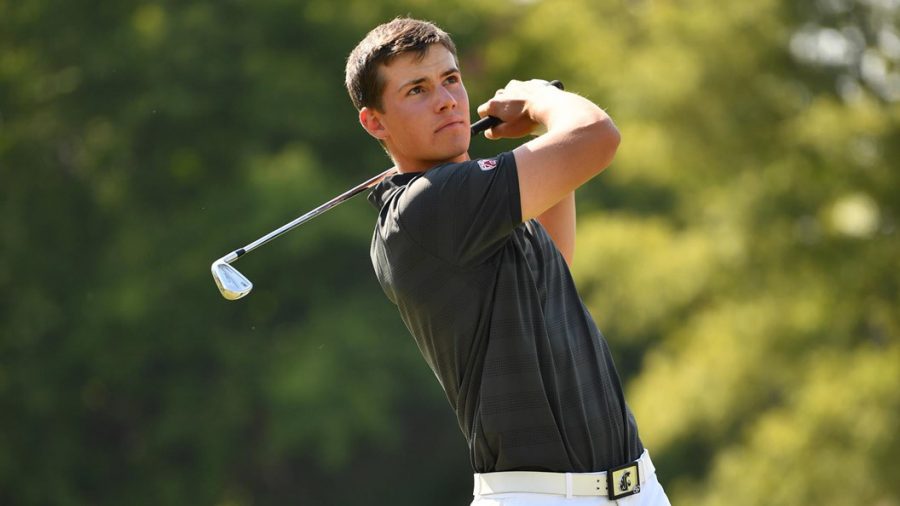 Senior AJ Armstrong competes in a tournament earlier this season.

The Cougars concluded the first round of play with a team score of 302 before second round action was suspended due to darkness.

“It was good to get back in the swing of things,” Head Coach Dustin White said. “We had some really good stretches of holes, and the guys showed resilience and maturity in bringing it back after a shaky start.”

Senior AJ Armstrong and junior Scott Redelsperger were the only Cougars to finish their first two rounds before play was suspended. Armstrong shot a 79 (+7) in the first round and 72 (E) in the second to put him in a tie for 26th. Redelsperger shot a two-round total of 149 (+5) to earn a tie for 21st place.

Junior Daniel Kolar is leading the way for WSU as he sits in a tie for 12th with two holes remaining in the second round.

Senior Grant Cole shot a 78 (+6) in the first round and is currently three under par in the second with three holes remaining. He is in a tie for 16th.

Junior Nicklaus Chiam is tied for 21st place with one hole left in the second round.

Cal State Fullerton currently leads the invitational with a team score of 538 (-3) with 13 holes remaining in the second round.

The Cougars will complete their second round and compete in the final round of the invitational starting at 7:30 a.m. Tuesday.