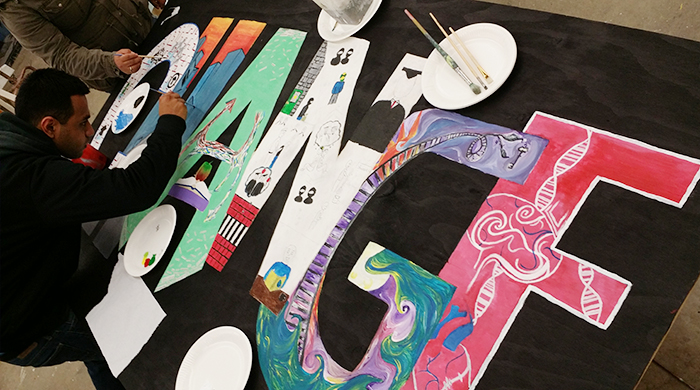 Alumnus Ivan Sabalza paints the letter "H" of the mural "CHANGE" during the spring semester.

As a way to serve the community, express class-gained knowledge and promote consciousness, one professor dedicates her time to facilitating murals created by youth and now, WSU students. The most recent mural displayed at the CUB is titled “CHANGE.”

Krystal Roig-Palmer, instructor and third-year doctoral student, completed her first mural at age 15. Starting at age 22, her career focused mainly with at-risk youth and families. She began introducing community murals to the youth she worked with, none of which have ever participated in something like this.

The making of a mural gives youth a voice and allows them to express their own individual background and perspectives on controversial topics in a powerful way, Roig-Palmer said. It started as a way for groups to represent their program and it evolved from there.

“It has always been this little light of hope no matter what job I was doing,” Roig-Palmer said. “It’s so amazing to see people open up and be a part of the whole process of making a mural.”

Roig-Palmer generally works with youth ages 11-18, so her first experience facilitating a mural with college students began at WSU this year. The political unrest happening while brainstorming the mural “CHANGE” influenced their project, challenging them to remain neutral, yet still send a bold message, she said.

“From a cultural, racial, philosophical standpoint, that was probably one of the most complex murals I’ve ever facilitated,” Roig-Palmer said. “All the different things our country was experiencing at the time, we were brainstorming and getting the ideals ready for that mural.”

“CHANGE” is based on the juvenile justice and corrections class, criminal justice 365. Four students worked on the piece from beginning to end: Ivan Sabalza, Mikala Ewert, Frank Ramirez and Anahi Trejo.

Mikala Ewert, first-year master’s student focused in criminal justice and criminology, decided to help with the mural because she enjoyed the class, and Roig-Palmer’s personality in general.

The piece focuses on the juvenile system, changes that need to be made to improve the system and also how to get into and out of the system once you’re in it, Ewert said.

“My inspiration was that it is a never-ending cycle,” Ewert said. “If we don’t give the juveniles the resources they need to get out of the cycle, they’re never going to because we don’t have a system set in place that really rehabs someone.”

Ewert designed the “A” in the word “CHANGE,” and also helped with the timeline. The timeline shows significant pieces of history related to the juvenile system, including 1899, the year it was officially established.

In the “A,” there’s an apple sitting on a book swing, which represents knowledge education opportunity, Ewert said.

“It is an art piece that shows collaboration from different backgrounds and different stories and aspirations in order to send an overall message that change is happening,” Ewert said. “It’s a way to show that change is inevitable whether it’s good or bad.”

Ewert said she felt the project helped her de-stress, while getting to people she might otherwise not have met if it weren’t for the mural.

“There is so much individuality that goes into [art], so pulling from your knowledge and your background to create something really forces you to understand the material that you’re learning,” Ewert said. “The art project itself is really important for the team that created it.”

Roig-Palmer said she believes this is a way for students to make an impact in a way they couldn’t imagine before.

“You don’t have to have advanced skill sets. As a matter of fact, you don’t have to have any formal art lessons,” Roig-Palmer said. “That’s the beauty of conducting projects like this — it really embraces everyone’s differences and level of skillsets, and you create a beautiful masterpiece.”