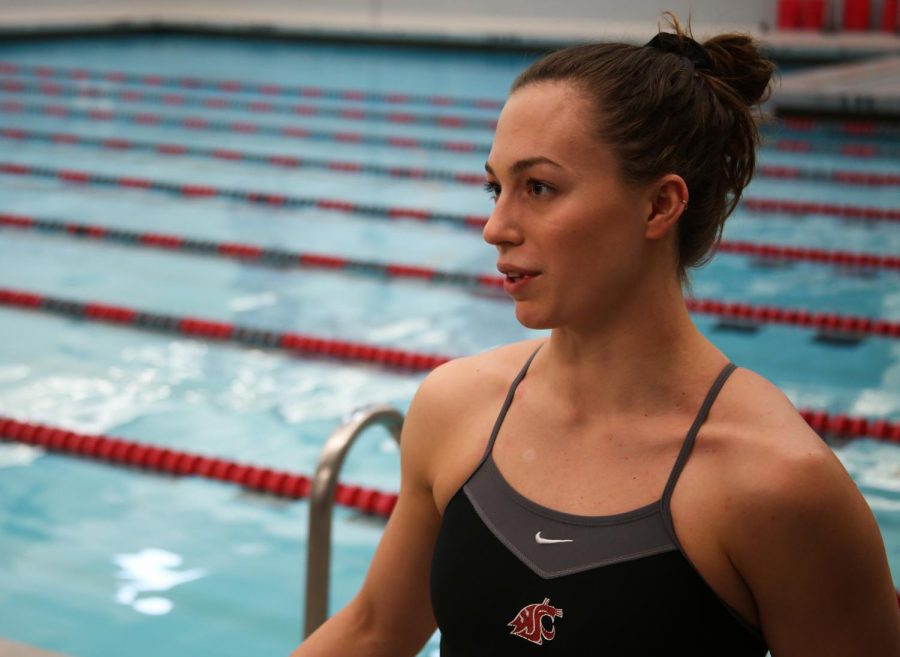 Senior breaststroke swimmer Linnea Lindberg speaks about her career at WSU and what first drew her to the university at Gibb Pool on Wednesday afternoon. Lindberg is the only senior on the team, joined by six new freshmen.

When most people think of Sweden or Pullman, they might only think of a cold-weather place. However, WSU swimmer Linnea Lindberg thinks of both places as home.

Lindberg, the lone senior on the WSU swimming team, is from Stockholm, Sweden.

“It is difficult to come to a new culture and experience a whole new place and language and everything,” Lindberg said. “A lot of my teammates back home went to college to swim and they said it was the best thing ever … and I wouldn’t want to do it any other way.”

Despite the geographical difference, Lindberg has enjoyed her time in Pullman. As she prepares for her final home swim meet, she fondly recalls how she became so connected to WSU.

“It has been challenging, but most of all it has been so much fun,” Lindberg said. “I am so happy with when it has been difficult and still having a team and having a close relationship with my teammates.”

Lindberg also had a successful career in her previous three years in Pullman, setting multiple personal bests at Pac-12 Championships.

“The Pac-12 is so cool because there are so many fast swimmers and it is so competitive,” Lindberg said. “I think for me in the pool, it is nice to experience a meet like that because then going into other meets you’re more calm and you know what is going on.”

The rest of the team consists of six freshmen, six sophomores and two juniors. For the past couple of years, Lindberg acted as a role model to her teammates.

As the only senior on the team, Lindberg embraces her role as a leader on the emerging WSU swimming program.

“The beginning of the year was difficult when there were a lot of changes and, sure, I would’ve loved to have other seniors here for the senior meet,” Lindberg said. “But coming out of this, I just want to be a good role model for the other people on the team.”

Although she spends a lot of time in the pool, she knows the importance of focusing on her academics. Between swimming and working toward a psychology degree, Lindberg stays active on campus.

Lindberg said the hardest part about being a student-athlete is learning time management.

“It’s all about just managing your time well, you know, planning ahead. You have to be productive you can’t just sit around,” Lindberg said. “Maybe you won’t always be able to go out Saturday night and hang with friends, but you got to put yourself first.”

As a key member of the swimming program, one person who sees Lindberg’s impact on a daily basis is Head Swim Coach Matt Leach.

“It is really important having Linnea as a senior,” Leach said. “We want to send Linnea out in the best way possible and as a program, we can help her make the NCAA Tournament.”

Even though she still has a few months left at WSU, Lindberg already has plans for when she graduates.

“I am going to spend a couple weeks in Turkey to train for nationals in Sweden. Depending on how I do at the Pac-12 meet, I might try to go to another event for the Swedish National team.”

She still dreams of going to the Olympics for Sweden but is happy with everything she already achieved. In fact, she wants to apply to graduate school in the fall to study cognitive psychology.

Though she may be far from her home in Sweden, Lindberg has found important qualities in herself by leading others in and out of the pool. Her final home meet as a Cougar is against Utah this Saturday at Gibb Pool.

“I am super grateful to have this experience away from home and be a part of college swimming,” Lindberg said. “Being able to work as a team and with different kinds of people, facing challenges together instead of just myself is going to be really helpful.”