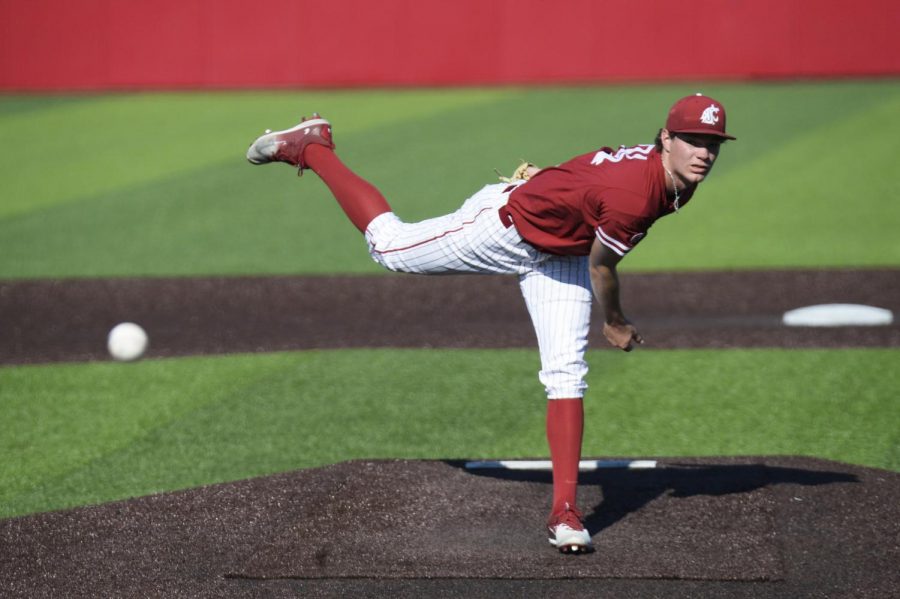 Sophomore right-handed pitcher Hayden Rosenkrantz throws a pitch during the exhibition game against Gonzaga on Oct. 21 at Bailey-Brayton Field.

The WSU baseball team will open their season at 2 p.m. this Friday in the Bay Area against the Saint Mary’s Gaels on a four-game road trip.

The Cougars faced the Gaels last season and ended up splitting the four-game series. Saint Mary’s will still pose a threat this weekend due to their previous success in baseball.

Under Head Coach Marty Lees, WSU definitely had to overcome some adversity with a 57-91-1 record since Lees took over in 2016.

With a strong recruiting class this year, Lees said he feels confident about the upcoming season and the future of this program.

“I really like how this team is coming together,” Lees said. “When you look at our line-up from our catcher and work our way out to the outfield, we return a very good defensive team.”

Last season WSU put together a combined .977 fielding percentage which was 35th in the nation. However, in order to be a competitive Pac-12 team this season, the Cougars need to make some offensive adjustments and their pitchers have to step up their game.

Junior left-handed pitcher AJ Block will be starting for the Cougars this Friday. Block said he loves the new pitching they have this year.

“I’m very excited about our rotation,” Block said. “The most exciting thing is that we have a lot of new guys and everyone seems like they are ready to go.”

The Cougars have 17 freshmen on their roster and eight of them are pitchers.

Lees said the pitching staff this year has a lot more strengths and they have a lot of potential to be great.

“I see guys who are able to throw second and third pitches for strikes,” Lees said. “The last three years we haven’t been consistent as far as identifying starters. I think we have that opportunity now.”

As far as the offensive aspects of WSU’s game, the line-up could look very different with nine other freshmen wanting to prove themselves.

Senior infielder Andres Alvarez and junior infielder Dillon Plew, both career .285 hitters, will add a veteran presence to the team and help add some depth to the line-up.

Lees said he has a lot of confidence in his players this year and their capability to win games.

“I think freshman Kyle Manzardo will be one of the best hitters to ever come through Washington State,” Lees said. “Our guys are ready to play.”

The Cougars will face Saint Mary’s at 2 p.m. on Friday as they look to start their season with a spark.