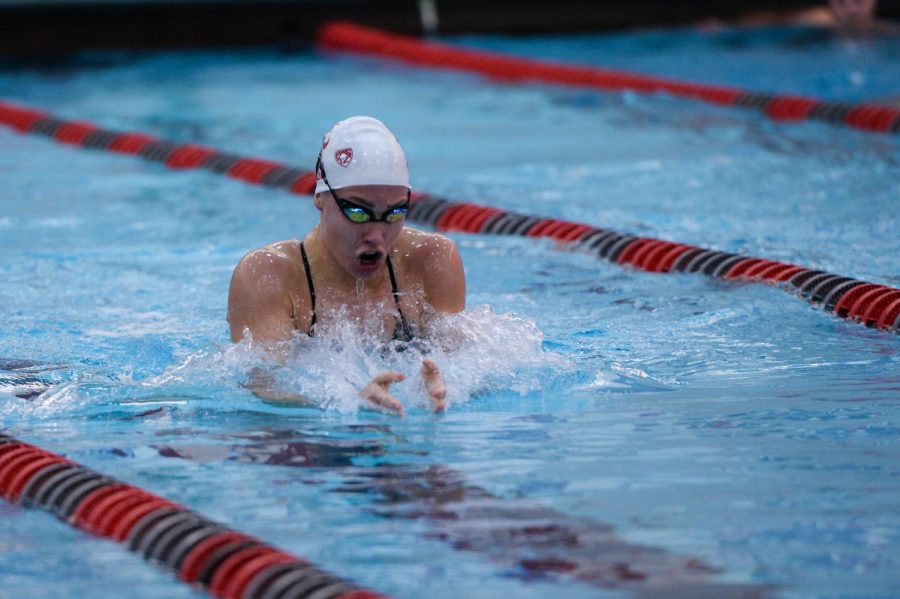 Senior breaststroke swimmer Linnea Lindberg races in the women’s 200-yard breaststroke against the University of Wyoming on Friday at Gibb Pool. WSU hosts Utah in their final home meet Saturday.

WSU swim will host Utah for their final home meet of the season on Saturday at Gibb Pool.

The Cougars won their last outing and third away meet of the season against Oregon State by a score of 148-114. This moves WSU’s record to 4-6 overall and 1-4 in the conference.

This meet was just what the Cougars were looking for right before taking on Utah and then moving to the Pac-12 Championships. Head Coach Matt Leach said he couldn’t have been more pleased with how the girls swam against Oregon State.

“It was a lot of fun to see our attitude be positive,” Leach said. “Our efforts been great and I am really excited.”

Against the Beavers, performing as well as she’s performed all season, sophomore Mackenzie Duarte continued to shine in her events. Duarte went on to collect three individual wins for the Cougars.

Joining Duarte were junior Ryan Falk and freshman Keiana Fountaine, who both collected two individual wins, something they have become accustomed to throughout the year.

Despite all the success winning individual accolades, many WSU relay teams managed to bring home victories as well.

The Cougars’ upcoming opponent, the Utes, are coming into Pullman with a 4-6 overall record and a 1-4 conference record.

The Utes’ last meet was also against Oregon State as they took home the win with a final score of 173-85.

Five strong seniors shone in the meet, one of which resulted in a pool record for the Utes. Senior Darby Wayner set this new record for the 100-meter breaststroke, helping her senior teammates bring home a first place victory in the 200-meter free relay.

Much like WSU, Utah also came away with many relay victories as well as individual wins.

Utah Head Coach Joe Dykstra also felt really good about how his team performed at their last home meet of the season.

“We were a lot sharper today than two weeks ago against BYU,” Dykstra said. “We finished races, turns were a lot crisper and our underwaters had more energy.”

Both teams will be looking to have some of the best times of their seasons on Saturday as they try to set themselves up for the Pac-12 Championships. The Cougars will dive in against the Utes at 11 a.m. at Gibb Pool.