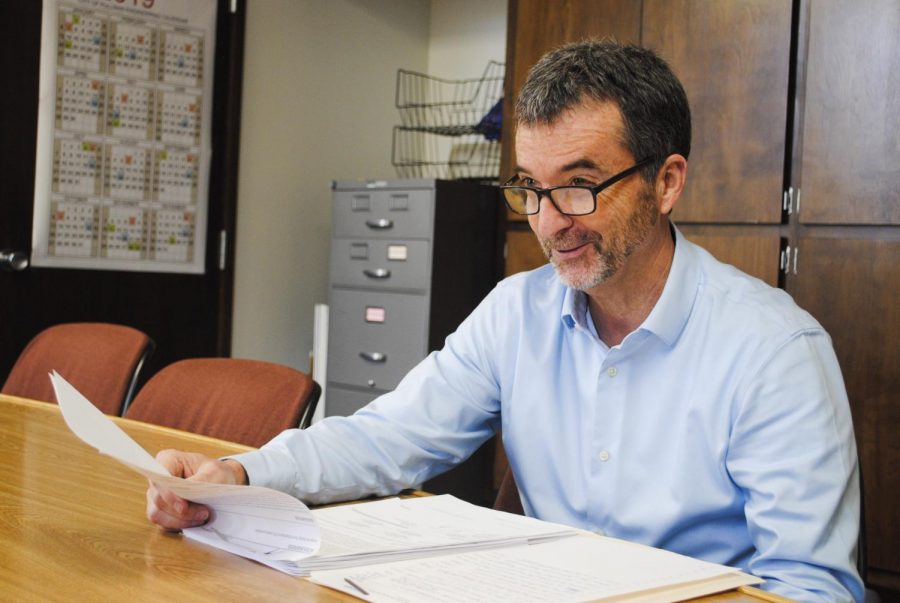 Kevin Gardes, Pullman public works director, says repairing the leaky water lines on Autumn and Summer streets are a way to address multiple issues with one project Tuesday morning at 10 a.m. in the Public Works department at City Hall.

The City of Pullman will spend $450,000 to replace water, sewer and storm lines and to redo some of the road on Autumn and Summer Streets.

The timeline is not yet set, but the construction company, Motley-Motley Inc., will start in April or May. They will have until the end of the contract, Sept. 14, to finish construction, said Kevin Gardes, City of Pullman public works director.

There have been three breaks in the waterline on Autumn and Summer streets in the last 10 years, making the construction necessary, Gardes said.

“As we look around Pullman for infrastructure projects to work on, a project where we can take care of multiple issues, those kind of tend to rise to the top because we can address more than just the waterline,” he said. “We can address deficiencies in other areas.”

The money required for the water and sewer line replacements will come from the utility fund, which is funded by the monthly rate people pay for their water and sewer bill, Gardes said.

Gardes said utilities have a tax which goes to the street fund to resurface and maintain streets.

There will be 1067 linear feet of waterline, 304 feet of sanitary sewer pipeline and 313 of storm pipeline replaced, Younce said.

The street is in bad condition. The storm and sewer lines needed work done too, Gardes said.

Younce said the sewer line sags in the middle and keeps the sewage from flowing properly.

Accounting for the sagging sewer line, Younce said they will make the center of the road slightly taller so water can drain better.

She said it took about a year to come up with the design for replacing the pipelines and redoing the road. The department had to prioritize where the pipes would go.

They had to decide where all the water, sewer and storm services were and what elevation everything should be at.

Americans with Disabilities Act curb ramps, the ramps with yellow truncated domes that are seen at corners where people cross the street, are being installed on the roads too.

The roads were built in the 1960s, before the ratification of the Americans with Disabilities Act, so the law did not require these domes. Younce said they help people who have mobility issues, but they also help people with strollers.

Younce said the waterline will be moved from the yard of Sunnyside Elementary School to the roadway. That will also move the hydrant closer to the road to give them better access to it.

Gardes said the pipes on those streets are also from the 1960s. The city only replaces pipelines when they need to be replaced because the money necessary to fix them comes from funds residents pay into. Still, Younce said the replacements are necessary.

“When we get old pipes, we get leaks,” Younce said.