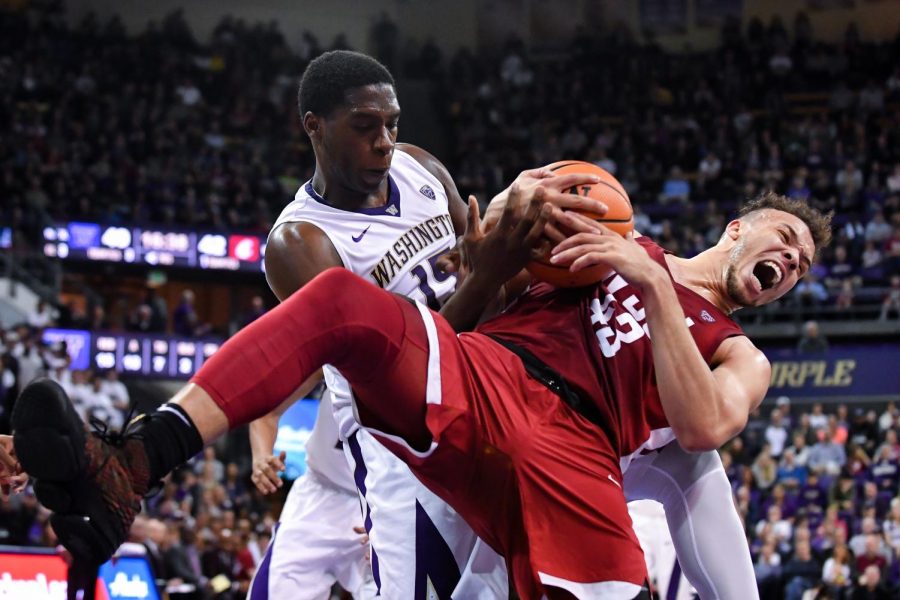 Huskies then-junior forward Noah Dickerson attempts to steal the ball from WSU former forward Drick Bernstine on Jan. 28, 2018 at Alaska Airlines Arena. The game resulted in a 62-80 loss for the Cougars.

Whispers on campus and chatter over social media all lead up to a game students at WSU and UW anticipate all year.

But now the wait is over as the universities will duke it out in an in-state rivalry Saturday in Beasley Coliseum.

Those two names spark more than just the emotions of excitement, but of rivalry, competition, tradition and unity as a campus.

The Cougars kicked off the conference season and faced the Huskies after the start of the New Year on Jan. 5 losing 85-67. At the time, freshman forward CJ Elleby took charge and reached his career-high of 26 points in the game.

Elleby did this without senior forward Robert Franks who had a hip injury at the time. Since then, Franks has returned and has been putting up big numbers for his team.

The Huskies were originally undefeated in the conference season, but had their first loss most recently against Arizona State 75-63. Huskies Head Coach Mike Hopkins commented on what he thought of the Cougar team and WSU Head Coach Ernie Kent.

“Going down to and beating the Arizona’s is a heck of an accomplishment,” Hopkins said. “You know it would be a heck of a test for us, a great challenge and we’re looking forward to the opportunity.”

Overall, Ernie Kent is 3-4 against the Huskies since his 2014-2015 start with only one of those wins being at home.

The two teams overall scoring averages in these past seven games leading into the eighth matchup has WSU at 82.1 points and UW at 84.9 points.

Kent reflected on the two teams progression through the season and how games have molded their experience in conference play.

The in-state rivals take the court at 5 p.m. Saturday in Beasley Coliseum as they look to extend a two-game winning streak, splitting their record with UW.