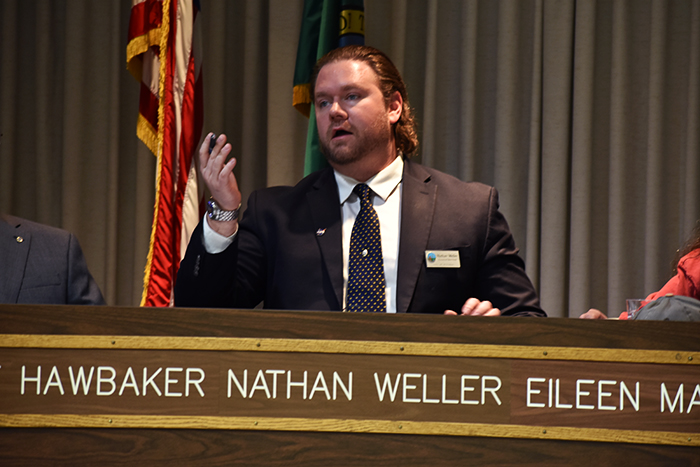 A resolution introduced by Pullman City Council members could change how the police interact with immigrants.

Council members Ann Parks and Nathan Weller introduced the resolution to make Pullman a welcoming city for immigrants at a May 16 city council meeting.

This resolution, if passed, would provide equal protection under law for all residents regardless of citizenship status. Pullman Police would not assist in incarceration or deportation unless required by legal action, such as a warrant signed by a judge.

Weller said it was time for the City of Pullman to make a statement to support immigrants.

“Pullman is already a welcoming community,” he said. “It is important that we put it in writing to support the immigrants that we have in our city.”

Pullman Police Chief Gary Jenkins said his main concern with the resolution was its language regarding police action in Pullman.

“Some of the initial language made it seem like our department would not work with immigration,” he said. “However, there are situations where we will assist, such as someone who has a warrant out for their arrest.”

Jenkins also said it is not in department policy to ask someone about their immigration status.

“The only time we would question immigration status is if they have forged identification documents,” he said. “However, we also check for warrants just like we do with everyone, and if they have an immigration warrant out, then we take them to Whitman County jail.”

WSU doctoral student Carolina Silva said this proposal has the potential to have both symbolic and legal impact.

“The symbolic value of Pullman becoming a welcoming city should not be underestimated,” she said. “For undocumented families feeling hesitant about sending their children to school here, I believe this designation would mean a world of a difference.”

However, Silva said this resolution would have little symbolic value if it does not include a section about police acting as immigration agents.

According to the updated resolution on the agenda for the June 6 meeting, the language regarding the Pullman Police Department’s involvement has been removed.

Silva said the language of the proposal gives her no concerns but notes an omission of status.

“While there is no particular language causing concern at the moment,” she said, “I would like to note the omission of immigration status in the proposal is a bit problematic.”

Silva also said this proposal needs to have language to protect more than just the undocumented community.

“It’s also crucial to note that this proposal is not only geared toward undocumented residents but also those who are green card holders, under Temporary Protection Status [TPS], refugees and visa holders,” Silva said.

Jenkins felt that undocumented students should feel safe in Pullman and should come to law enforcement if they need assistance.

Weller expressed that all citizens of Pullman should feel supported.

“We support our international community,” he said. “Actions will need to be taken by individuals, organizations and the city to improve the climate.”

Weller said that the City of Pullman needs to back their community partners.

“We have been in contact with ASWSU to see their language of a similar resolution they made,” he said. “The political climate has been challenging for immigrants, and it is important for the city to make a statement.”