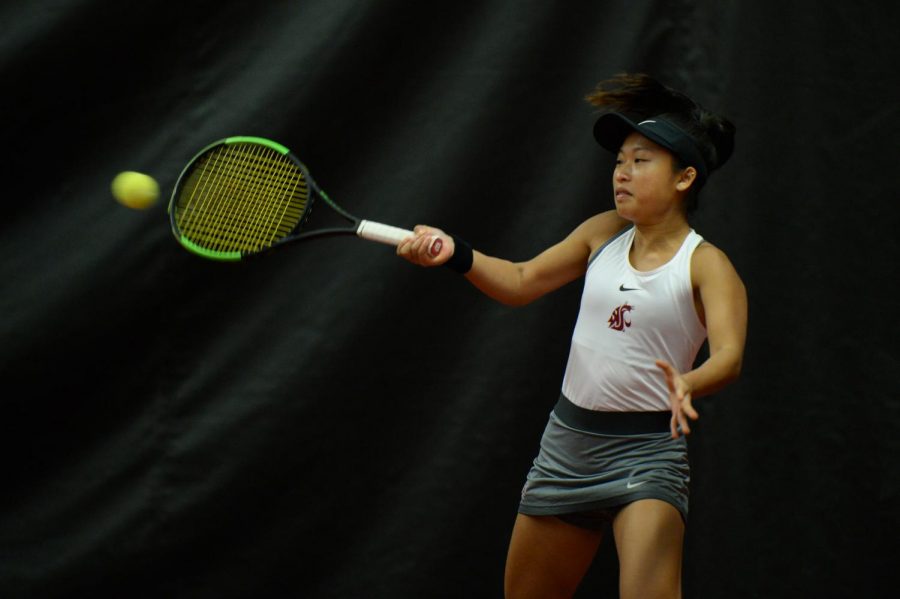 Cougar tennis claimed a 4-0 victory on the road over Purdue on Saturday in Indiana.

The sweep over the Boilermakers (5-3) is WSU’s fifth shutout victory this season. The Cougars (8-1) also defeated Purdue 7-0 last season in Pullman.

The Cougars claimed the doubles point thanks to victories from freshman Yang Lee and junior Melisa Ates and sophomore Michaela Bayerlova and senior Aneta Miksovska.

In singles play, freshman Savanna Ly-Nguyen defeated Purdue junior Alex Sabe 6-1, 6-1, to earn her first singles win since the Michigan State match in Missoula, Montana on Jan 20. This gave the Cougars a 2-0 lead.

No. 63 Bayerlova would follow suit with a 6-2, 6-1 victory over Purdue senior Silvia Ambrosio, the ninth-ranked player in the nation. This was the highest-ranked win by a WSU player since Elisabeth Fournier took down the No. 8 player in 2010.

Senior Tiffany Mylonas clinched the win for the Cougars claiming a 6-2, 6-1 victory.

“Today was a total team effort,” Hart said in a WSU news release. “We came out with great energy in doubles, great discipline and carried that through the entire match.”

WSU hosts a doubleheader against BYU and Seattle on Friday at Hollingbery Fieldhouse. The Cougars will play BYU at noon before facing the Redhawks at 5 p.m.