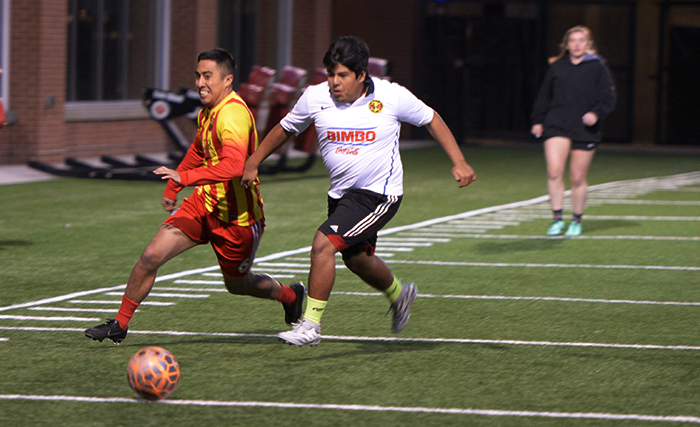 Students compete in a game of intramural soccer April 28 at Rogers Field.

WSU is one of only 16 colleges in the country with transgender-inclusive policies for intramural athletics. Most collegiate university recreation programs have not shown this openness to the transgender community.

The list was compiled by Campus Pride, a non-profit organization working to create a safer environment for LGBTQ students, according to their website.

Campus Pride included WSU on the list based primarily on policies outlined in the UREC handbook.

The handbook states that transgender students “shall be permitted to participate in Intramural Sports and Sport Club programs in accordance with the individual’s consistently asserted gender identity.”

This is to say that if a transgender student that consistently identifies as male wants to participate in intramurals, then that individual may do so as a man.

The handbook also states that transgender individuals “shall not be forced to use the locker room corresponding to their gender assigned at birth” and will be provided with an available accommodation “in accordance with the individual’s consistently asserted gender identity.”

UREC Assistant Director Matt Shaw said there has yet to be a complaint regarding participation eligibility of transgender students but if there was one, it would not be tolerated.

“Our eligibility policies are pretty clearly stated in our handbook, and we have zero interest in restricting opportunities to participate in intramural sports for any WSU student,” Shaw said. “If someone wants to participate in our program, we will do everything possible to make it happen for them.”

UREC began offering open intramural leagues in the summer of 2017. These leagues do not have minimum gender requirements like coed leagues.

If there are enough players to field an open league team, the gender makeup of the team is irrelevant. This opens the door for individuals who don’t identify as either male or female.

“In addition to hopefully increasing participation in intramurals overall, we felt this was a good step in removing a barrier for those students who are transitioning and/or don’t align with the traditional gender binary,” Shaw said.

WSU is the only school in the state of Washington to make the Campus Pride list. Shaw acknowledged that he’s proud of the university in that aspect but added that UREC has not finished.

Shaw said there’s still efforts to be made on this topic and if UREC can expand on its inclusive element, they’ll do so. Overall, he said UREC wants to create an environment that serves all students at WSU rather than serving most and ignoring some.