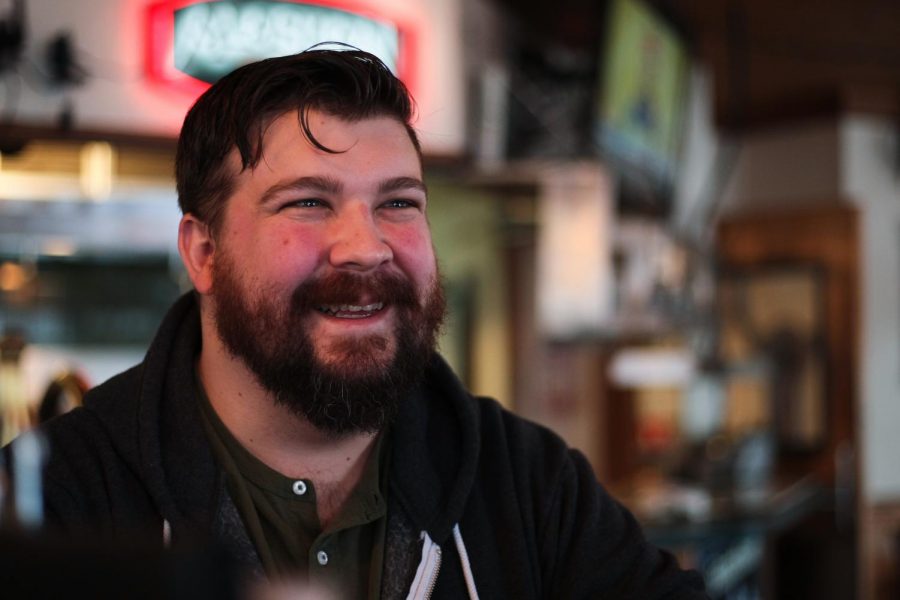 Jake Weigand, manager of Moscow Alehouse, talks the ins and outs of working at a bar in small town and his favorite aspects of the job Feb. 6 in Moscow. Weigand enjoys talking to patrons about travel destinations.

Every so often, a spark strikes in the right place at the right time and genius is brought forth into this world.

Charlie Mopps, the mythical Irishman who invented beer, comes to mind. Or how about Sir Thomas Philips, the great Irish adventurer who was historically the first man granted a license to make whiskey. Hell, even the Greeks loved wine so much they put a god in charge of it — thank you, Dionysus. Life just wouldn’t be the same without any of you.

I heard tales of one of these great knights of fermentation in my kingdom. His name was Jake Weigand, and I set out to meet him.

Weigand, the manager at Moscow Alehouse, was kind enough to sit down with me on a cold afternoon to talk about his fermented favorites and share some good advice for one and all.

Weigand sipped on a Huckleberry Pucker while I had a pint of the Abyss Imperial Stout, and we got down to basics. He’s a direct man — a political science and philosophy major from the University of Idaho — a trait to which he attributes his ability to be a great bartender.

He enjoys a good vodka tonic or a glass of wine from Colter’s Creek downtown and finds himself at home serving the lovably-named “Alehouse Babies,” the local regulars of Moscow who stop at the Alehouse for a beer or six.

I asked him what it is about the Alehouse that makes him enjoy working there so much.

“Absolutely the people, we have a ridiculous number of regulars,” Weigand said.  “A lot of people assume that this is more of a college bar, but we have a lot of locals come in and professors come in, as well as people with their families.”

Weigand is a knowledgeable gentleman who cares for you and takes his holy task of bartending seriously. Not only is he your best friend for the two hours that you sit at his bar — and rightly so, that’s the mark of a great bartender — but he also wants to know about you.

I wanted to know what Weigand loves to talk about behind the bar, be it with a once-a-week regular or a brand-new patron.

“Ultimately, travel,” Weigand said. “What have you seen? What breweries have you visited? Have you seen a cool winery? It’s the opportunity for me to find out new stuff.”

Probably one of the most profound and poignant things I learned from Weigand was his desire to work behind a bar and not at a brewery.

“I feel I would get bored, just brewing. I like planning for events,” Weigand said as he gestured around him.

“It was originally founded by one of my old professors, Jason Johnstone-Yellin,” Weigand said.

Johnstone-Yellin is a Scotsman who used to teach ethics and philosophy at the University of Idaho and used to be a regular at the Alehouse, Weigand said.

Weigand appreciates that social connection, the sacred interaction and contractual back and forth between drinker and drink server. That is a man dedicated to service.

There are legends among us, and one stands in Moscow behind a bar. Jake, I raise my glass to you.  You are — and my hat is off — a professional.

If you’re feeling like a pint of great beer or just want to talk about whiskey, head to the Alehouse and ask for Jake; I’m sure he would be glad to hear about your favorite drinks or travel destinations.

The Moscow Alehouse is located at 226 W. Sixth St. in Moscow.