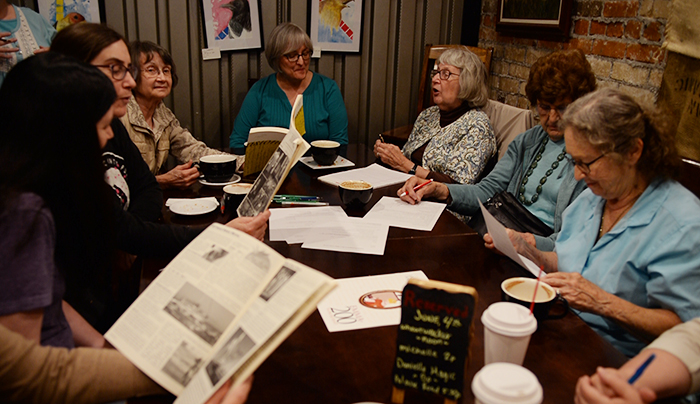 For the first unofficial club meeting, Jane Austen enthusiasts filled a Café Moro room with 15 fans who traveled from places as far as Clarkston to discuss the influential author.

This idea started with Michele Larrow, organizer and WSU psychologist, who joined the national Jane Austen Society of North America (JASNA) in 2009.

“I like the way she portrays people and relationships and emotions, it seems very natural to me,” Larrow said. “Even though the language people used in 1800s is different, her capturing human nature was pretty good.”

The startup of this group falls around the 200th anniversary of Jane Austen’s death, July 18. At Sunday’s meeting, contributors tossed around celebration ideas and decided to hold a tea in Spokane on July 22.

Larrow’s goal is to begin a regional club affiliated with the national group for surrounding areas including the Spokane, Moscow, Pullman and Coeur d’Alene areas, seeing as the nearest one today is in Seattle.

Regional chapters require at least 10 members and with Sunday’s first meeting exceeding this, the group is off to a prosperous start, Larrow said.

“National meetings have speakers, people who are Jane Austen experts or sometimes they’ll bring in someone who’s been in one of the movies,” Larrow said. “They’re going to have Amanda Rute from Persusian [in 2018].”

Sheryl DeShields, WSU secretary senior of the psychology department, became an admirer of Jane Austen when the movie “Pride and Prejudice” with Kiera Knightly was released in 2005. This led her to reading most of the author’s books.

“She was so forward thinking and an independent woman. I think we all appreciate that about her,” DeSheilds said. “Look how many years it’s been, and her books are still popular.”

The meeting included people from newly interested readers to experts on Jane Austen.

“Different perspectives on them made me want to reread,” DeSheilds said. “It takes a while to get her humor, [but] once you do the books come to life.”

Larrow said some final words to the group as they wrapped up, reminding them of the meeting dates ahead.

“It was wonderful. We had people from all different walks of life,” Larrow said. “It went better than I expected, and there was a pretty high interest.”

Larrow attended the most recent annual conference for JASNA, and this is part of what inspired her to want to start a local book club. A regional club would have many of the benefits and connections to the national club, she said.

“There was like 800 people there, and I didn’t know a soul but I could just go up and talk to people,” Larrow said. “It’s like if you’re a comic book nerd and you go to Comic-Con.”

The next gathering is on July 22 in Brambleberry Cottage and Tea House in Spokane. The official club meetings begin in September and more information can be found on the Facebook page jasnaewanid.