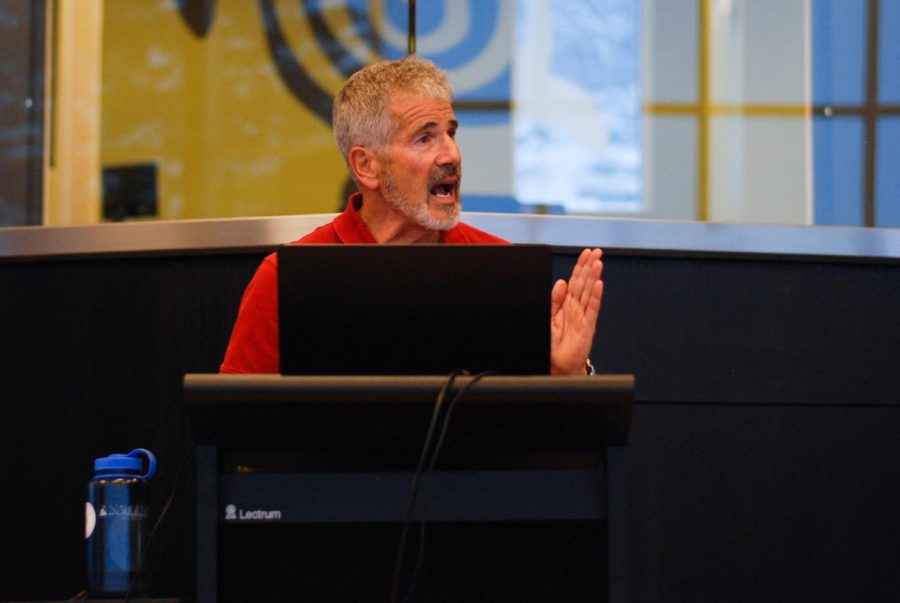 During his lecture about impacts of climate change on human health yesterday at the Elson S. Floyd Cultural Center, Dr. Paul Auerbach said pollution causes a number of ailments and estimated that 8 million deaths have occurred because of the effects of climate change.

He started the lecture by reminding the audience that physicians are not climate scientists, but as a physician he has spent most of his career examining the human health impacts of climate change across the globe.

Auerbach has a background in wilderness and emergency medicine and was a first responder after the earthquakes in Haiti and Nepal.

Human consumption of energy and resources has virtually doubled from 1950 to 2000, he said. This has created a series of unpredictable impacts. He noted over-fished resources across the world’s fisheries, increased carbon-dioxide in the atmosphere and human pollution.

All of which, Auerbach said, have an impact on human health.

He said pollution is the largest environmental cause of disease and premature death. He estimated pollution causes nearly 8 million deaths a year, attributing pollution to increases in mercury poisoning, lead poison, asthma, heart disease and many other ailments.

Auerbach also attributed many other factors that adversely affect human health to climate change. Including, increased cases of heat-related illness, increased vector-borne diseases as a result of changing insect habitat and a decrease in food and water security.

He mentioned the social and political impacts of depleting resources as a result of climate change.

“These impacts will displace people and cause conflicts up to genocide,” he said. “Water scarcity may be the single greatest cause of conflict within our lifetime.”

Auerbach said all of these issues will disproportionately impact the least advantaged people in underdeveloped nations. He said it will be important for governments and organizations to provide support for those who will most need it.

“We have to anticipate these adverse health effects,” He said. “We have to step back, look at what we need to do and get it done.”

Auerbach said it is important to reframe the dialogue surrounding climate change to make it personal.

Brad Luff, an environmental science graduate student who attended the lecture, said it is important for people to consider the human impacts of climate change.

“Environmental science is a misnomer — it really is about people,” Luff said.