No. 15 WSU will take on BYU, Seattle hoping to extend winning streak 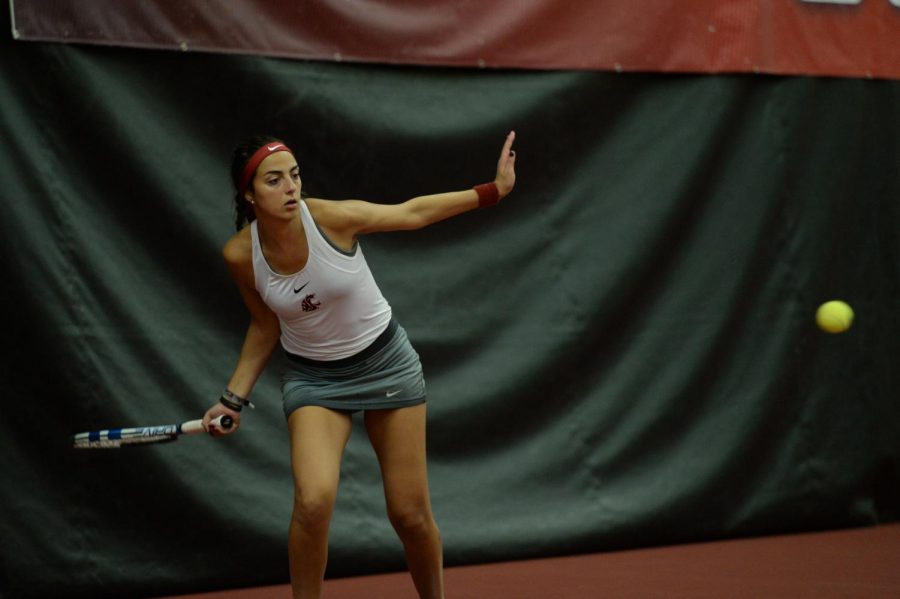 Senior Tiffany Mylonas keeps her eye on the tennis ball during the match against Eastern Washington on Jan. 12 in Hollingbery Fieldhouse. The Cougars return home Friday for the first time in over a month.

The wait is over as Cougar tennis returns home to host a doubleheader Friday in Hollingbery Fieldhouse.

The newly ranked No. 15 Cougars (8-1) will battle Brigham Young University and Seattle University.

Head Coach Lisa Hart said she expects teams to get after the Cougars more as they continue to rack up the victories this season.

“Even when we’re favored to win or think we’re supposed to win,” Hart said, “we need to make sure we have that same intensity we’ve had.”

Currently on a two-match winning streak, the Cougars will first play BYU (3-1) at noon. BYU has less playing experience this year compared to WSU. They’ve only competed in four matches while the Cougars have taken part in nine.

“It’s better to have more matches to get used to the … matches, the pressure, the adrenaline,” senior Tiffany Mylonas said. “If they only have four matches, they still don’t really know how it is.”

BYU also comes into the matchup on a two-match winning streak and boasts a 1-1 road record. This is BYU’s first match in nearly two weeks.

WSU is 11-6 all-time against BYU and the Cougars defeated them 4-0 in their most recent match last season.

Following the Cougars match against BYU, they will take on Seattle (4-4) at 5 p.m. The Redhawks recently lost 4-3 to Montana State on Sunday.

WSU is Seattle’s second and last match against a Pac-12 team this season. The Redhawks already lost 7-0 to UW to start off the year.

WSU and Seattle have both faced Eastern Washington this season. The Cougars swept the Eagles 7-0 in Pullman in their second match this year while the Redhawks fell 6-1 to EWU on Feb. 2.

Last season, the Cougars beat the Redhawks 4-0 and WSU leads the all-time series 12-1.

Despite having success against their two opponents in the past, Hart said the Cougars need to be prepared for anything.

“I think our focus has to be every day is a new day,” Hart said. “So maybe a team didn’t play well one day. They could be a totally different team now.”