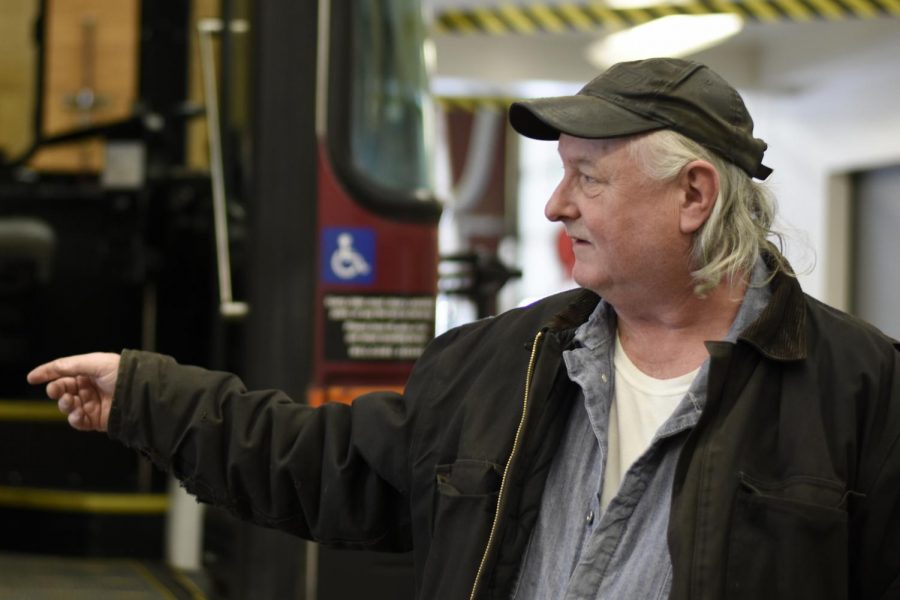 Heavy Equipment Mechanic Bill Westby points to where a pair of pigeons lived in the main repair shop on Thursday.

Local heavy-equipment mechanic will be retiring at the end of this month after almost 38 years working for Pullman Transit.

Bill Westby said he worked mostly on buses, and his interest in them started when he was a child.

Westby had wondered how buses worked.

“When the door opens, how did that door open?” Westby said.

He said he was confused because school buses at the time had manual doors, but transit buses did not.

“I always liked tearing things apart and repairing things,” Westby said. “As a kid, growing up, I worked on small engines, outboard motors. You name it, I worked on it.”

He said after he went to trade school, he worked for different companies. This includes Continental Baking Company, the company that created Wonder Bread.

Westby said he worked on the trucks for Wonder Bread, but he also worked on other repairs that needed to be done. He worked on conveyor belts and a donut line, which was new at the time.

Also working for the union, Westby said that meant plenty of work in the summer, but not  much in the winter. When he was with the union, he also took on a position for Modern Machinery, a logging company.

“We’d have 13 guys in the shop and there’s one piece of equipment in there and everybody who smoked back then was hiding behind the piece of machinery and the smoke’s going over the top of the vehicle,” Westby said. “You know, they’ve got to lay you off. They can’t afford to keep you.”

He said that is when he decided he wanted to work for a county, city or state, so he ended up working in Pullman. He has been here since 1981 because he likes the work and the people.

Westby said Pullman Transit did not have much equipment when he began working there.

They had a press, one jack, four jack stands, some three-quarter inch tools and an airgun to take the tires off buses. There were only six buses, not the 22 they have now.

There was only one other mechanic; now there are 6, including one assistant manager and one manager.

Over the years, he has encountered many animals while working. About three years ago, he said, there were two abandoned pigeons in the shop, but they could not find the owners after calling people.

“Another mechanic — he really took to these pigeons,” Westby said.

He said the mechanic bought them food they liked. Even their boss wondered about what the mechanic was doing with these pigeons. After a week, they still hadn’t left.

The mechanic trained the pigeons to sit on the mechanics’ bench, Westby said. One would sit on Westby’s laptop while he was there. When the birds became tired, they would fly up into the air ducts and other pipes in the building.

When it was time to leave, the mechanic would call the pigeons down, and the birds would go outside and wait for them in the morning. The mechanic even took them to his house, but by the afternoon, they would be back at the shop, Westby said.

Eventually, they took the pigeons to Moscow, in hopes that they would not come back. After that, the mechanics never saw them again.

After being a mechanic for so many years, repairing fire trucks, police cars, and even lawnmowers for the parks department, he said he enjoyed how every day was different.

“I tell the new guy I’ve been training, ‘all the buses, they all look alike, but they’re all different,’ ” Westby said.

Each of the vehicles he works on has different problems that need to be fixed, but technology is also changing, he said. Everything was mechanical and nothing had sensors when Westby started working at Pullman Transit.

“When you left, you were so greasy by the end of the day back then. [Now,] every once in a while, you get into a messy job, but a lot of it’s electrical,” he said.

Chris Arvas, automotive repair supervisor, said he has worked with Westby for more than 33 years.

“When you work with somebody that long, you’re almost like family,” Arvas said. “You really get to see the good times, for both of us, as well as the bad times that happen along the way.”

They both remembered a time when a transit driver accidentally reversed a bus dead-center into a road grader, and so they had to repair both.

“It pushed the back end of that whole bus into the engine and it was leaking fuel,” Westby said. “[The bus] was still running. Of course, we heard it. We all went out there.”

Once he retires, Westby said he plans to go to Deer Lake, which is about 40 miles from Spokane. He has bought two properties there, one of which still needs to be developed. He plans to live there full-time by next winter.

Westby said he is also starting to grow his hair back out again, like he did when he was in high school, because, as a mechanic, it can easily get caught.