Greenfield says hip-hop can be a vehicle to express trauma 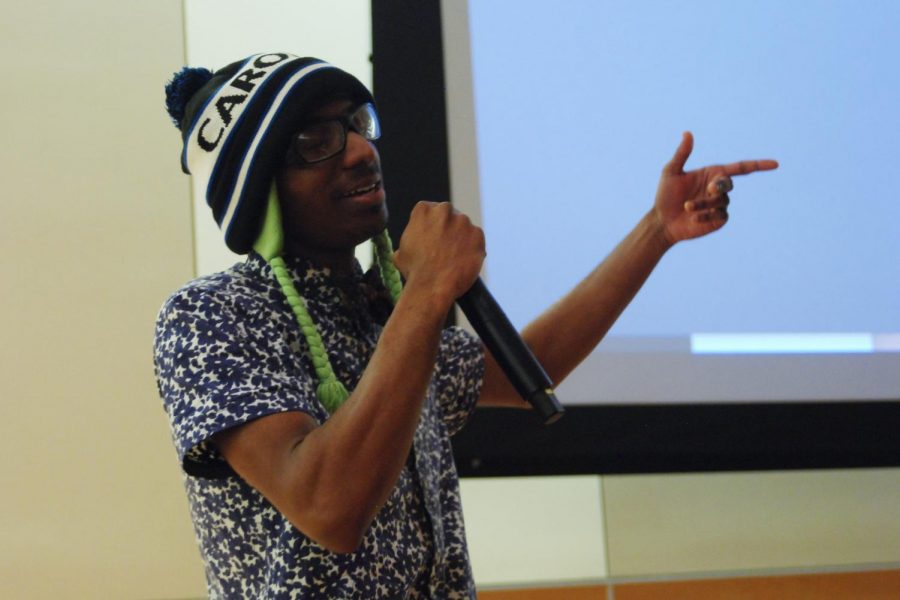 Derek Greenfield, an author and motivational speaker, led a lecture and conversation about hip-hop culture and mental health along with hip-hop artist Jamie from the hip-hop collective James Hope.

Greenfield said hip-hop is about freedom and liberation through authentic self-expression, and can be empowering through this process.

He said hip-hop in essence is about storytelling, and the stories told in hip-hop answer the question: “what is it like to be you?”

Greenfield said all people have experienced some sort of trauma within their life.

“Some of us are willing to talk about our trauma,” he said. “And some of us are still struggling to do that.”

Greenfield said hip-hop can be a vehicle for artists to express their trauma, and through this art people can relate and heal through the lyrics and stories being told.

An attendee at the event said she had been moved to tears by the lyrics and themes of Kendrick Lamar’s “Alright.”

Jamie said both listening to and creating hip-hop music had been greatly beneficial in his own struggle with mental health.

“Hip-hop has saved my life multiple times,” he said.

Jamie explained a special connection he had with Isaiah Rashad’s “Heavenly Father.”

“Every single word [in that song] matched up with how I felt,” he said. “It made me feel like I wasn’t alone.”

Greenfield said a shift that has taken place within hip-hop as of late.

“For a while, toxic masculinity ruled [hip-hop],” he said.

Now artists in the genre are becoming more open to being vulnerable and transparent, he said. Instances such as rapper Logic’s 2018 Grammy performance when he performed a song centered around suicide awareness and prevention, Kanye West’s 2018 album “ye,” on which the cover-art displayed the hand-scribbled phrase “I hate being Bi-Polar its awesome.”

Greenfield even played for the audience Lil Wayne’s verse on the Solange’s “Mad.” In the verse, Wayne outlines his drug abuse as a coping mechanism for depression and his frustration after a failed suicide attempt.

Greenfield used all of these moments as examples of a shifting paradigm in hip-hop, seeking to address the stigmas surrounding mental health.

“It is important to build a safe-space within the hip-hop community,” Jamie said. “Creating a dialogue can push the culture forward.”