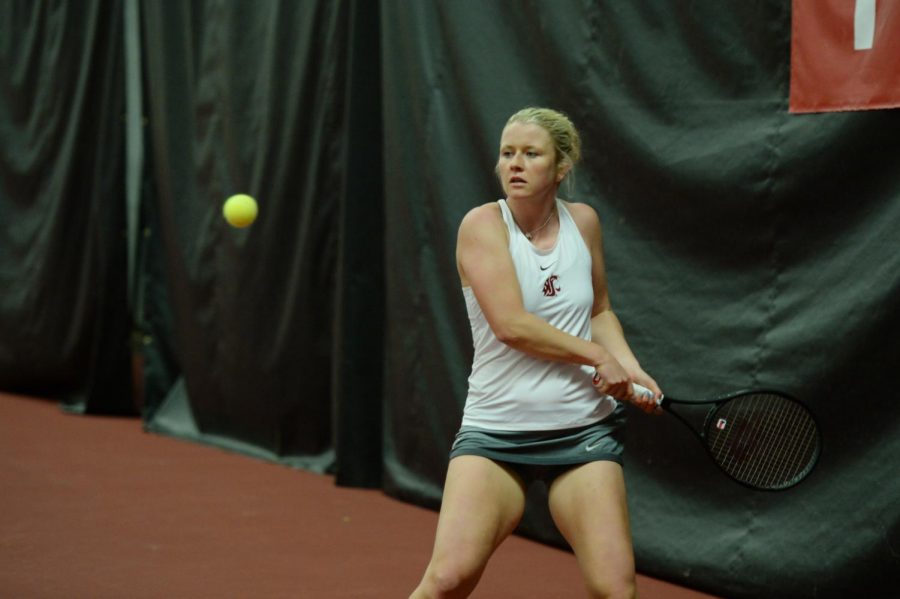 Senior Aneta Miksovska watches as the tennis ball approaches before volleying back to Eastern Washington on Jan. 12 at Hollingbery Fieldhouse.

No. 15 WSU tennis notched a pair of victories Friday against BYU and Seattle inside Hollingbery Fieldhouse.

The Cougars (10-1) returned home for the first time in over a month and Head Coach Lisa Hart said she was encouraged by her teams fight.

“I’m really proud of our team,” Hart said. “It’s tiring to have two matches in one day so I could sense that we were getting tired at the end but I’m really proud of the way they handled their matches, especially the ones who had close sets.”

Following them was sophomore Michaela Bayerlova and senior Aneta Miksovska. Bayerlova and Miksovska secured their doubles match 7-5 to earn WSU the first point of the game.

“I think it’s nice to finally be home,” Hart said. “In a way on the road there’s almost less distractions so I was proud of our players blocking out the noise and getting that ‘W’ especially in the doubles play.”

In the singles matches, Bayerlova opened up with an impressive 6-1, 6-1 win. The No. 36 nationally ranked player improved to 7-0 in dual matches with the win.

This left three matches still to be played. Mylonas fell in the third set of her match, to make the score 4-1.

Ates then brought in a 6-3, 6-1 win and Miksovska closed out the BYU match with a 6-1, 6-2 win, her 90th career singles win. Miksovska is tied for fifth place with Ekaterina Burduli in all-time singles victories at WSU.

After the match, Miksovska embraced her seniority and accomplishment.

“Yeah it’s exciting, I’m not really like counting but it’s great,” Miksovska said. “It’s just bittersweet for me, it’s been four years so 90 wins is a lot of matches so it’s been great.”

Following the 6-1 win against BYU, the Cougars faced Seattle. WSU claimed the opening doubles point over the Redhawks to take an early 1-0 lead.

Junior Melisa Ates struck first in singles with a smashing 6-0, 6-0 win to put the Cougars up 2-0.

Sato went back and forth in an exhausting match that she would claim 6-2, 6-2 to clinch the match win for the Cougars.

Ly-Nguyen finished her singles match 6-3, 6-3 to put WSU up 5-0, leaving two more singles matches. It was down to freshman Yang Lee and Miksovska and all eyes were on them.

Lee closed out her hard hitting match with a three set win and Miksovska put the cherry on top with a 6-2, 6-2 victory, her 91st of her career. This gave the Cougars a 7-0 win, their sixth sweep this season.

WSU improved to 12-0 all-time against Seattle.

The Cougars will head north to face Gonzaga 2 p.m. Sunday in Spokane.