Purchase a new vehicle for icy conditions; floor the gas when you stall 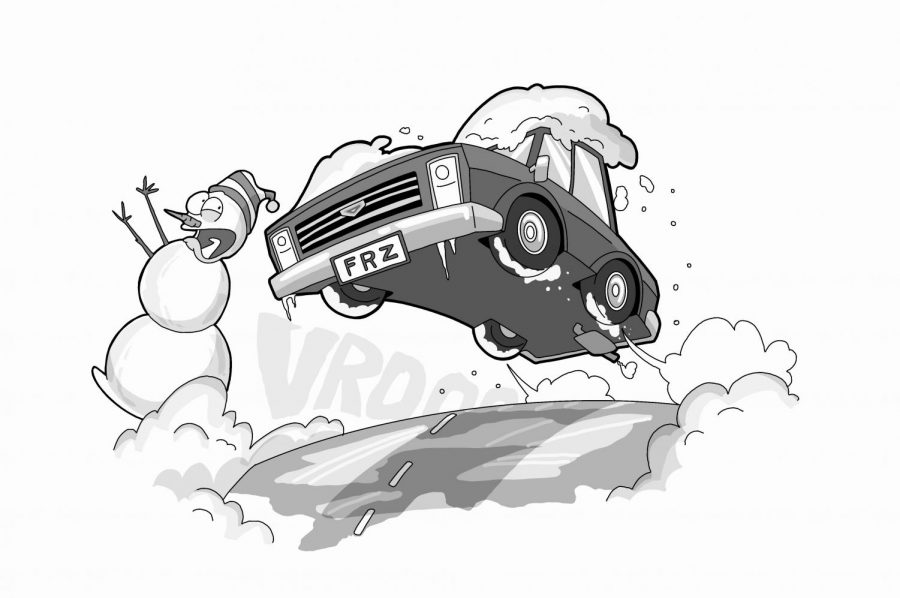 Due to the increasingly severe winter weather in Pullman and surrounding areas, the Palouse Department of Transportation (PDT) has released a series of tips for local drivers to promote safe automobile practices.

Department Head Jim Brevins said the first thing to do is to go all-out with precautionary preparations. This includes buying a full set of snow tires, putting chains on those snow tires and only driving on roads that are completely clear of snow.

“You might have to get out of the car every now and then and do a physical examination of the road to make sure it’s actually clear and not just saturated in black ice,” Brevins said. “Just go out in the middle of the street and run around a bit to make sure it isn’t slippery.”

Brevins also said it might be worth investing in a new car if the snow persists longer than a week or two. Drivers who don’t have all-wheel drive or at least two feet of clearance should under no circumstances go out in winter weather.

“It’s just not worth it,” Brevins said. “You could take the bus, but then you have to stand outside in the cold for a few minutes. You might as well just cryogenically freeze yourself.”

Department spokesperson Olga Sigmundson offered her own tips should residents choose to drive anyway. The first step, she said, is to make sure your engine is in good condition — preferably brand-new.

“You’re going to be revving your engine a lot, spinning your tires very fast,” Sigmundson said. “If your engine isn’t up to that, you’ll be in a lot of trouble.”

When pulling away from a parking lot or getting started after a red light, she said, it’s important to floor the gas pedal immediately as the car needs extra power to launch across the snow and ice.

On turns, spin the wheel as far to the desired side as possible since the car won’t respond to more subtle motions.

“You can always make corrections later,” Sigmundson said. “There’s no harm in driving up onto the sidewalk a little or bumping a mailbox with the bed of your truck.”

As for getting unstuck, Sigmundson said people often make it harder than it is. The PDT released a simple, one-step process with a 100 percent success rate for cars which are otherwise weather-ready: hit the gas. Continue applying more gas until the tires are spinning at full capacity.

If you haven’t gotten out by then, Sigmundson said, your car has other issues and shouldn’t be out on the roads at all.