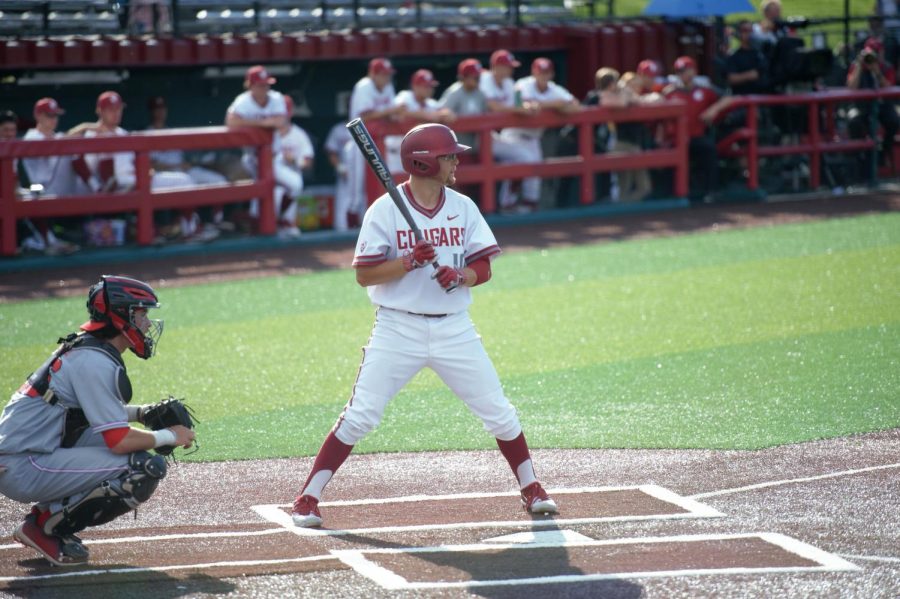 Then-senior first baseman James Rudkin steps to the plate and awaits a pitch against Utah on May 24.

Both teams started off scoring in the first inning with freshman infielder Kyle Monzardo hitting a two-run double to center field to give the Cougars (1-5) a 2-0 lead.

The first inning concluded with Broncos freshman infielder Matt Jew reaching base on an error, scoring junior catcher Jake MacNichols to even the score at 2-2.

The Broncos came back in the third inning scoring twice with RBIs from Jew and Dicochea to give them a 4-2 lead over the Cougars.

Freshman left-handed pitcher Ky Bush was taken out of the game after 2 2/3 innings, giving up three earned runs off of five hits and three strikeouts. He was relieved by redshirt junior right-handed pitcher Davis Baillie.

Baillie pitched for two innings and only gave up one hit before being relieved by freshman left-handed pitcher Tyson Guerrero in the bottom of the fifth inning.

Santa Clara junior left-handed pitcher Brenden Ecklebarger dominated for the first five innings after recovering from his sloppy start. He only allowed six hits and recorded three strikeouts until he was relieved by junior right-handed pitcher Michael Praszker.

Praszker was relieved after 1 1/3 innings of work, throwing two strikeouts and giving up zero hits. Junior left-handed pitcher Russell Grant II took over in the bottom of the sixth inning.

Neither team would score after the third inning as Santa Clara secured the 4-2 win.

The series is tied at 1-1 and the first pitch for the third game is set for 1 p.m. Saturday at Stephen Schott Field.