Cougs fall to Utah after sloppy second half 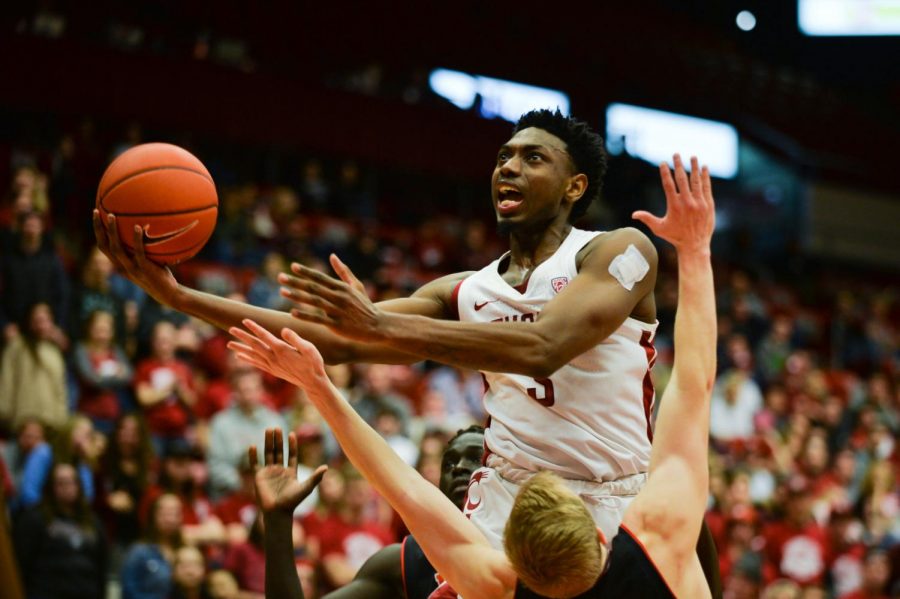 Head Coach Ernie Kent said he needed another veteran guy on the court like junior forward Jeff Pollard, who sat out due to a concussion, to help the team work together better.

“The momentum got away from us,” Kent said. “We went to the bench and they got really stagnant. There are some tough lessons to learn for our new guys tonight.”

Senior forward Robert Franks got the scoring started for the Cougars knocking down a three-pointer as WSU jumped out to a 10-2 lead just three minutes in the game.

The Utes fell into a three minute scoring drought but knocked down a three-pointer to quite an electric crowd.

Five minutes into the first half, every starter on WSU had scored a basket and they were shooting over 72 percent from the field to maintain an eight point lead.

Halfway through the first half, the Cougars quieted down on offense but remained high on energy. Despite WSU sinking down to 58 percent, Utah could not find any answers and still trailed by eight.

Utah slowly crept back into the game thanks to a couple of three-pointers from its veteran players to reduce the deficit to only two points and forcing Kent to call a timeout.

Multiple mistakes from freshman forward CJ Elleby allowed the Utes to take their first lead of the night at 36-31 with five minutes left before the break.

After a slow start, Utah finished the half shooting 60.7 percent from the field with 10 three-pointers.

Despite a 22 point effort from Franks, the Cougars trailed by 45-43 at halftime due to sloppy turnovers. WSU shot 53.6 percent from the field in the first half and 66.7 percent from beyond the three-point line.

The Cougars got off to a rough 0-5 start to begin the second half while the Utes hit 3-5 to increase their lead to eight.

Utah senior guard Sedrick Barefield kept a loud crowd in check with five made shots from behind the three-point line and a team-high 24 points six minutes into the second half.

No one could seem to sink a shot for WSU allowing Utah’s lead to keep growing as the game was beginning to slip away.

With 10 minutes remaining, both teams looked completely different. Utah couldn’t seem to miss and the Cougars couldn’t buy a bucket.

“First of all, they were on fire from three,” Daniels said. “It was just tough to guard them, we got to learn how to close out halves.”

With seven minutes left in the game, WSU was shooting 4-16 in the second half and trailing by 12 points.

The Cougars attempted to rally on offense multiple times but ultimately fell short 92-79.

Utah knocked down 16 three-pointers in the game, five of which came from Barefield. He scored a game-high 33 points and sophomore Donnie Tillman had a double-double with 16 points and 11 rebounds.

WSU will head to the bay area for its last road trip of the regular season when they take on Stanford 6 p.m. Thursday. The game can be seen live on Pac-12 Networks.