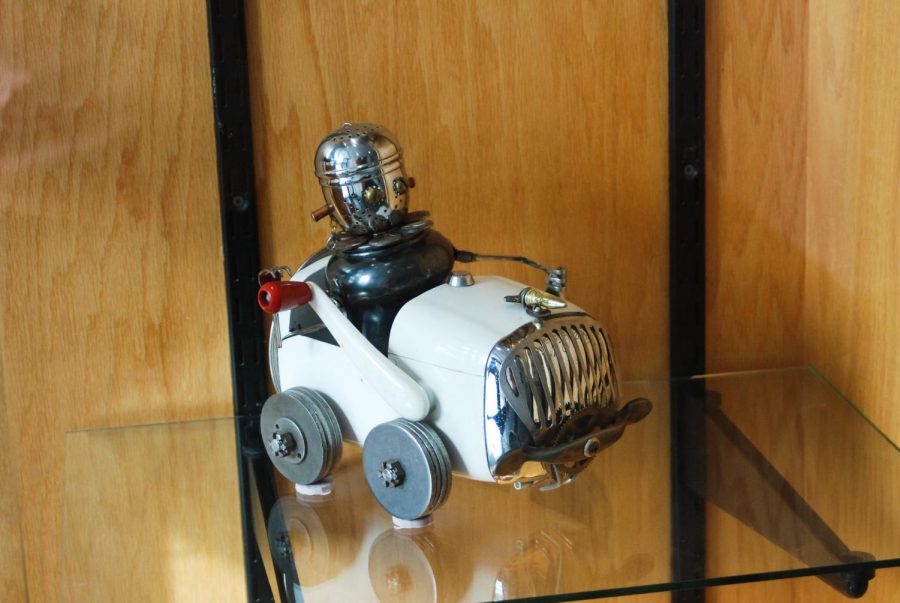 A sculpture of a robot driving a car is on display in the Dave Coyle exhibit at the Neill Public Library.

Dave Coyle, Pullman bus driver and artist, never lets one of his scrap metal robots leave his garage until viewers can see the personality in each piece.

“Even the most simple robot I make, I spend two to three hours building it and creating its face,” Coyle said.

Coyle’s most recent collection, “Robotomobiles,” is on display at the Neill Public Library until the end of March. This is the third time he has displayed at the library. However, he said this collection is different from his past work.

His work is made of 95 percent recycled parts, the only non-recycled parts being fasteners that are hard to find used, Coyle said. All the artwork is held together using nuts, bolts and washers with a drop of Loctite, a superglue for parts.

“There are a couple of pieces in the library that I have [worked on for] over 200 hours,” Coyle said.

Coyle said his daughter named his artwork “A Different Kind of Junkyard,” a name he says represents the look he is aiming to achieve.

Originally, he said, he made the pieces for gifts and didn’t realize how many people were interested in purchasing them until his wife suggested selling a few.

Coyle said since he began selling pieces over the last few years, he has sold around 30 pieces, although he has been making artwork for the last seven to eight years total.

Bailey said children especially enjoy his work. She remembers watching six children sitting down “criss-cross applesauce,” lined up in front of the case, just looking at the robots.

The library has over 5,000 visitors a week, which Bailey said offers unknown artists great visibility and provides whimsical art to the public.

“What is special about Dave is that he can put character into these pieces,” she said. “I didn’t think that was possible.”

She said Coyle will be one of the featured artists at the Pullman ArtFest, which will go from May 17-18.