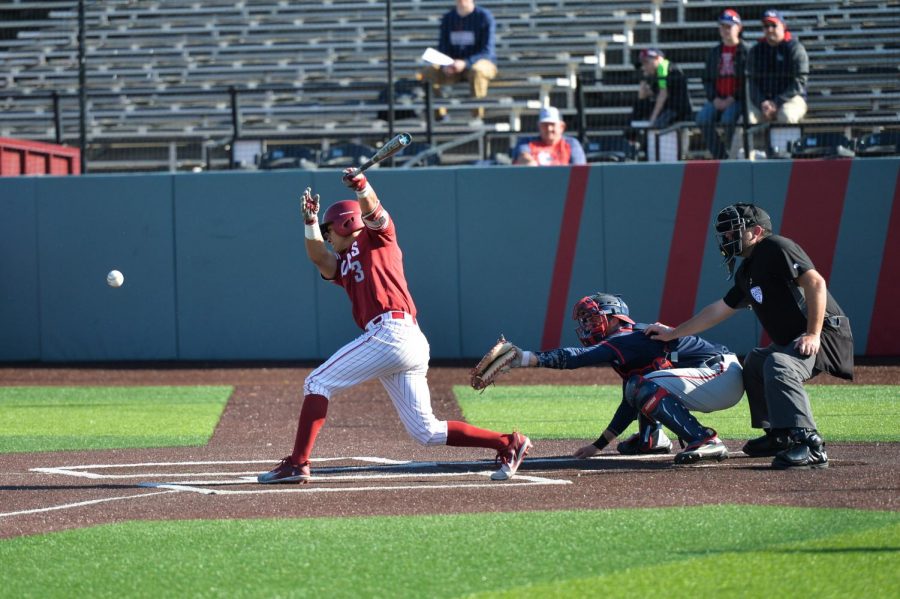 Senior infielder Andres Alvarez attempts to hit the ball in a game against Gonzaga on Oct. 21 at Bailey-Brayton Field.

WSU baseball used a six-run eighth inning to complete a comeback victory over Santa Clara on Sunday. The win means the Cougars split the four-game series with the Broncos 2-2.

WSU got on the board first in the top of the second inning when sophomore infielder Garrett Gouldsmith hit a single to center field to bring Manzardo home and give the Cougars a 1-0 lead.

Santa Clara (2-5) responded in the bottom of the inning, scoring a pair of runs to take a 2-1 lead.

Manzardo hit a double to left center field in the third inning to bring in junior outfielder Danny Sinatro and tie the game up.

The Broncos showcased their offensive talent in the bottom of the third inning by recording two home runs from junior infielder Jason Dicochea and junior catcher Jake MacNichols to take a 4-2 lead.

The Cougars relied on Manzardo again in the top of the fifth inning when he hit a fly out to right field to bring in Sinatro, reducing the deficit to one run.

The top of the sixth inning seemed like the time for the Cougars to take the lead over the Broncos, as they loaded the bases with two outs. However, Manzardo was unable to capitalize on the opportunity and hit a groundout to end the inning.

Kolden hit an RBI single in the seventh inning to score sophomore outfielder Collin Montez and tie the game up at 4-4.

The Broncos fought back with their third home run of the night from freshman infielder Blake Faddoul in the bottom of the seventh to retake the lead.

The Cougars did not back down as Manzardo and senior catcher Rob Teel brought in three runs with no outs in the eighth inning to give the Cougars a 7-5 lead.

WSU continued to pour it on as Kolden hit a two-run double and sophomore outfielder Brody Barnum hit a sacrifice bunt to score Montez. The Cougars had a 10-5 lead.

The Broncos scored a run in the bottom of the eighth inning, but it was enough as WSU secured a 10-6 win.

The Cougars return to Pullman for their home opener against Nevada 4:05 p.m. Thursday at Bailey-Brayton Field.