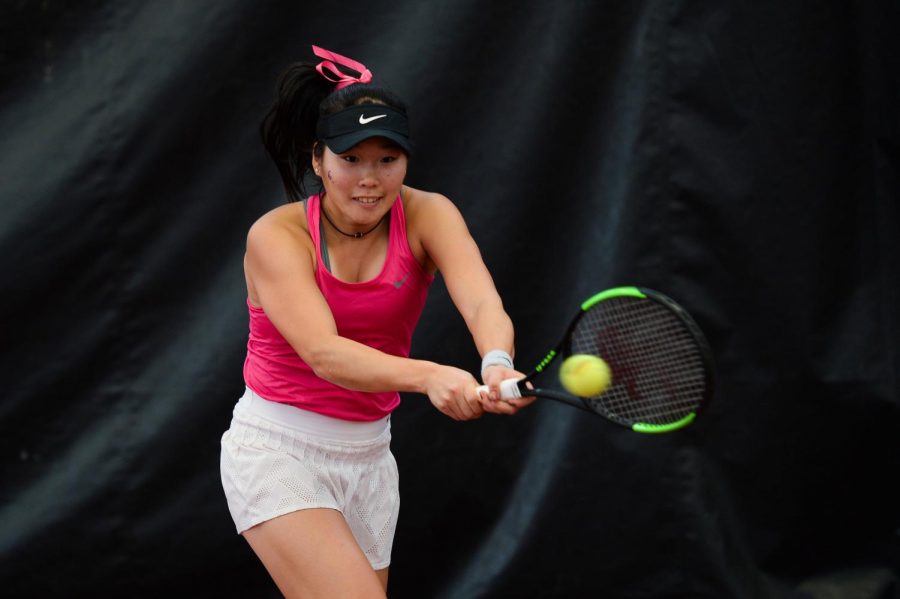 Freshman Hikaru Sato returns a ball during singles play against BYU on Friday at Hollingbery Fieldhouse.

No. 15 WSU tennis dropped a hard-fought battle with No. 47 Gonzaga 5-2 on Sunday in Spokane.

The Cougars (10-2) entered the contest with the Bulldogs (5-2) coming off a pair of home victories over Brigham Young University and Seattle on Friday.

“I was impressed with how Gonzaga competed today,” Hart said in a WSU news release. “They played a great match and deserved to win today.”

The Bulldogs had a 3-0 home record entering the match with the Cougars and were coming off a 6-1 loss to No. 26 University of Washington on Tuesday in Seattle.

The Cougars and Bulldogs last faced each other Feb. 28, 2015 in Hollingbery Fieldhouse, resulting in a 6-1 win for WSU.

The Cougars dropped the opening doubles point against the Zags, the first time they have lost the doubles point since being swept by Stanford 4-0 in their first loss of the season on Jan. 27.

In singles play, Gonzaga jumped all over the Cougars as freshman Hikaru Sato fell 6-1, 6-3 right off the bat.

The Bulldogs took a commanding 3-0 lead after Gonzaga Sophie Whittle, the No. 4 ranked player in the nation, defeated sophomore Michaela Bayerlova in straight sets. This was Bayelova’s first straight set loss this season.

With their backs against the wall, the Cougars responded as junior Melisa Ates claimed a 6-2, 6-4 win in her match to reduce the deficit to 3-1. Freshman Savanna Ly-Nguyen followed with 6-4, 6-3 victory to pull WSU within one of the Zags.

Senior Aneta Miksovska fought hard in her match, forcing the second set to a tiebreaker, but it was not enough as she fell 6-2, 7-6 to give Gonzaga its match-clinching fourth point.

Senior Tiffany Mylonas took her match to three sets but ultimately lost to secure the 5-2 win for the Bulldogs.

WSU will look to rebound when they travel to Manhattan, Kansas to battle Kansas State noon Thursday. The Cougars will then head to Lincoln, Nebraska to face Nebraska and Iowa State on Saturday.