Athlete of the Week: Brandon White 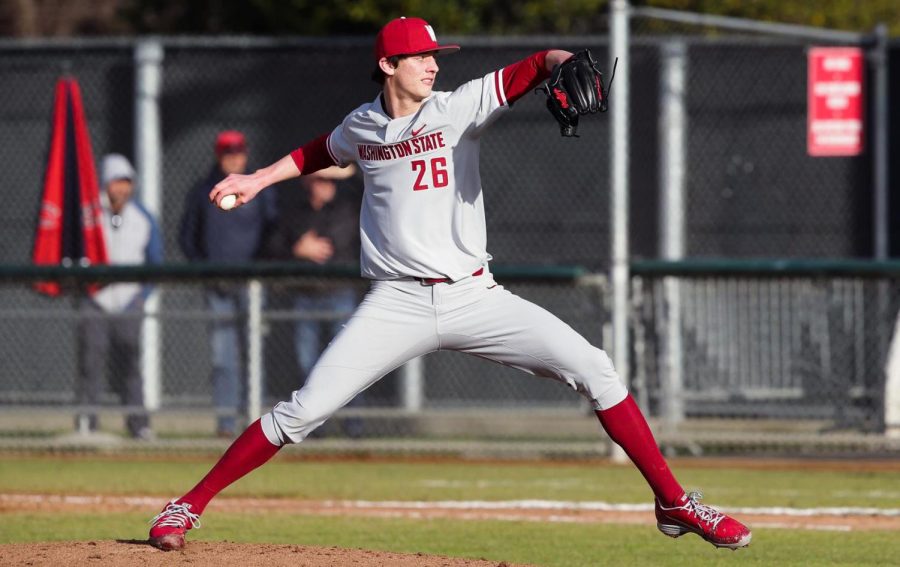 Brandon White cruised on Thursday, pitching five perfect innings before an Andres Alvarez fielding error broke up a dream start for the freshman.

White shook off the runner on first and retired the final four batters he faced, pitching six-and-a-third innings of no-hit balls. White dominated, striking out nine batters and walking none in the best start by a WSU pitcher so far this season.

The young starting pitcher has a 1-1 record for the season in two starts, pitching a 4.00 ERA with two strikeouts and no walks. White has shown incredible command of his pitches in the young season, issuing only one free pass in the form of a hit by pitch. Brandon has also started sharp as a fielder, recording three assists and a putout with a perfect 1.000 fielding percentage.

Brandon White attended W.F. West High School in Chehalis, Washington, where he earned three varsity letters for Head Coach Bryan Bullock. Brandon broke out in his junior year, pitching for a record of 6-2 with a 1.88 ERA and 54 strikeouts in 44.2 innings. His pitching helped his team to a second-place finish in the Washington 2A State Tournament.

White’s senior year was even more impressive. He pitched a 7-2 record with a 0.34 ERA and 92 strikeouts in 55 innings with only 12 walks. Brandon was named to the All-USA Washington Second Team. He was also named Co-Most Valuable Player of The Chronicle’s All-Area team and The Olympian’s Senior Male Athlete of the Year.

White was selected in the 14th round of the MLB amateur draft by the Los Angeles Dodgers but elected to continue his amateur career at WSU instead of playing ball in the Dodgers’ farm system.

Brandon White is an impressive young arm in the Cougars’ starting rotation. With four years of development to come, WSU may have a future MLB ace on its hands. Six-and-a-third innings of no-hitter balls gives Brandon White this week’s Daily Evergreen athlete of the week.