The Daily Evergreen • May 5, 2017 • https://dailyevergreen.com/5014/sports/former-pro-bowl-seahawk-embraces-pullman/ 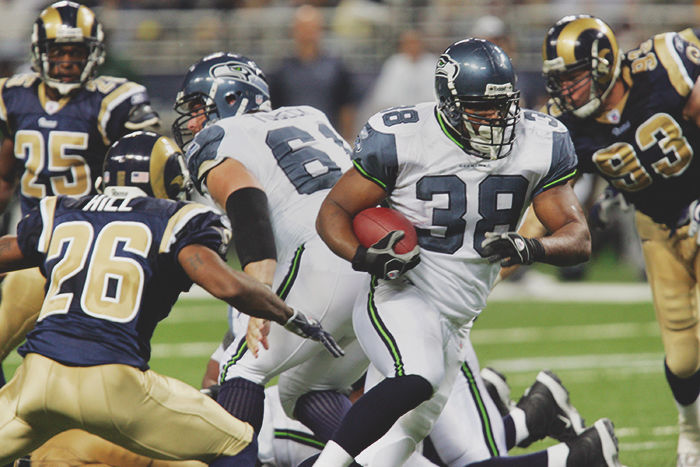 Former Pro Bowler and Seahawks fullback Mack Strong, who is well known for blocking defenders for former Seahawks running back Shaun Alexander, is now in Pullman finding ways to get involved with the community while working for the NFL Legends Committee.

Strong went undrafted out of the University of Georgia, and said there was a period in his life when he doubted his future in football.

In an effort to continue living out his childhood dream of being a professional athlete, Strong went to Seattle to try out as a rookie free agent and made the team. Playing in the NFL was a “huge blessing,” Strong said.

“It was really rewarding,” he said. “Just to have the opportunity to get to the Super Bowl in my 13th year was huge.”

After over a decade of playing, Strong suffered a neck injury and retired after his 15th season in the NFL in 2007. Strong went on to a have brief stint in broadcasting.

After he retired from broadcasting, he took over some of the family duties, which allowed his wife Zoe Higheagle-Strong to go back to school.

Higheagle-Strong is a Nez Perce tribal member from Lewiston, Idaho. She moved to Seattle in 1993 in search of different scenery. Strong said the couple met at a Mexican restaurant in Seattle during his rookie season in 1994, and they have remained together since.

At first, the foundation reached out to students in Native American communities and tribes in Western Washington. Strong held leadership camps, where he brought in a group of professional athletes to help with development programs.

Throughout the years, the programs have evolved into intervention programs for schools in the Highland School District in Seattle and are expanding to the Nez Perce Tribe.

Higheagle-Strong admitted that she has always been a sports fanatic.

“To be able to have a lifestyle in sports was really fun,” Higheagle-Strong said.

Although she enjoyed the lifestyle, she highlighted how it “opened up a lot of opportunities,” such as the TEAM-WORKS foundation.

The involvement with the youth camps and working with children throughout the Pacific-Northwest is what Higheagle-Strong said inspired her to go back to college.

She ended up getting her doctorate at the University of Washington, where she focused on Native American and marginalized students who were having a hard time adapting and connecting with “traditional academic learning environments.”

“The work my wife is doing is very meaningful,” Strong said. “I feel good about being in a position to be able to support her. She supported me for many years throughout my professional career.”

In the summer of 2015, Strong and his wife sold their house in Seattle and moved to Pullman so she could pursue her dream of being an educator.

“We knew it was going to be a challenge,” Strong said, “but we felt we were up for a challenge.”

Because WSU is built on traditional Nez Perce homelands, Higheagle-Strong viewed this as an opportunity to move back and teach near her tribal lands. She said it was a fitting time because WSU was in the process of diversifying their faculty, and specifically looking for Nez Perce staff members.

The move, however, has not been easy on the family’s two boys, Isiah and Evan.

The first year was difficult for the brothers as it was tough for them to leave their sports teams in Seattle, but Higheagle-Strong said they are doing better.

With the lack of youth centers in Pullman, Strong thinks children will benefit from having a place to gather, connect and have fun during non-school hours, and plans to build facilities that he hopes to complete within five years.

In the meantime, Strong is still busy working with the NFL Legends Committee, where he serves as Director for Pacific-West teams. The teams he represents are the Rams, 49ers, Raiders, Chargers, Arizona Cardinals and the Seahawks. He started working with the committee in 2013, and recently signed a three-year extension.

In his free time, Strong helps coach the Pullman High School football team, which he has been involved with for the past two seasons. His son, Isiah, was a varsity starter as a freshman this past season.

Strong said he enjoys the opportunity to help the team and stay connected to his children. He plans to continue coaching next season.

“To see them doing their best and having fun makes me very happy as a dad,” Strong said.