‘Ahead of his time’ 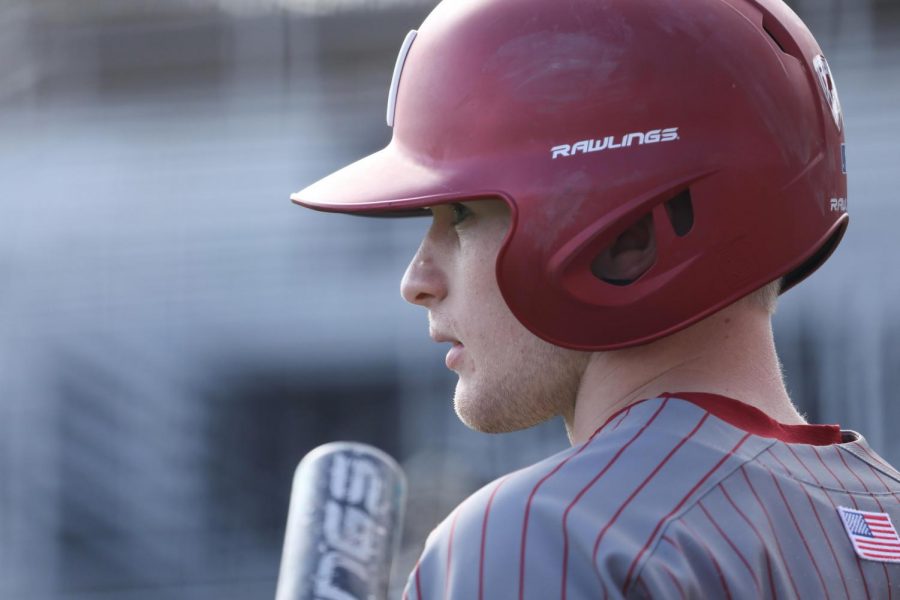 Freshman infielder Kodie Kolden started hitting and throwing baseballs with his dad, Brady, when he was 3 years old. “He’s a hard kid to explain because he’s not your typical athlete,” Brady said. “He doesn’t think he’s better than anybody.”

Kodie Kolden has never been one to shy away from the spotlight.

When he was still in middle school, Kodie interacted with star MLB players such as Troy Tulowitzki and Nolan Arenado in their clubhouse thanks to a relationship he built with former MLB pitcher LaTroy Hawkins.

“He’s one of those kids where no situation is too big for him,” said Hawkins, who pitched in the MLB for 21 years with 11 different teams.

It all started in March 2012 when Kodie’s dad, Brady Kolden, took him to Tempe Diablo Stadium to see a Los Angeles Angels of Anaheim spring training game.

From the stands, the Kolden family watched one of the players walk on the field at the conclusion of the game. It was Hawkins. He was playing catch and hitting balls to his daughter, Troi.

Debra Morrow, Hawkins’ mother, was on the field as well and when she glanced up she noticed there was one family left in the stands.

Hawkins said his mom told him to invite the family onto the field and soon enough Kodie was playing catch and hitting ground balls with Hawkins and his daughter.

After a while, Brady walked onto the field and told Hawkins they had to catch a flight back to Spokane. Hawkins gave him his email and told him to stay in touch. Forty minutes later, Kodie came running back onto the field and said he could stay longer because Brady changed their flight.

Hawkins said he was impressed with what he saw.

“Clearly, I could see Kodie was pretty advanced at 11 ½ years old,” he said.

Hawkins, now a special assistant to the general manager for the Minnesota Twins, quickly became a family friend of the Koldens. The family came out and watched him at spring training every year after that until Hawkins retired in 2015.

In return, Hawkins gave Kodie the experience of a lifetime by inviting him into the clubhouse to spend hours learning from a professional hitting coach and interacting with Hawkins’ teammates.

Hawkins said Kodie was mature for his age and wasn’t in awe of the MLB players around him. Instead, Kodie used it as a learning opportunity and soaked up as much knowledge as he could.

“[Kodie] always wanted to be better,” Hawkins said. “He wanted to do whatever it took to be the best he could be.”

Brady said Hawkins took Kodie under his wing and taught him to respect the game.

“He’s always been there for [Kodie], whether its good times or bad times,” Brady said, “and that’s the stuff that’s made a difference for him because he didn’t have me — I wasn’t that impact on his life.”

Growing up, Kodie’s family wasn’t very interested in sports, but he was. Brady said when Kodie was 3 years old they spent hours in the yard playing catch or hitting baseballs.

At the age of 5, Kodie played his first season of T-ball. Brady said he tried to find the best coaches he possibly could to help Kodie progress, since he never played the sport himself.

This meant Brady reached out to people well outside their hometown of Post Falls, Idaho, for private lessons and sent Kodie to camps as far away as Florida.

“I could tell from an early age that he definitely was going to have an opportunity to do something with the game,” Brady said.

In August of 2012, Kodie and the Post Falls Little League team had the opportunity to play in the Northwest Region title game in San Bernardino, California. A victory would have sent the team to the Little League World Series in Williamsport, Pennsylvania, but they fell just short.

Kodie didn’t let that set him back and in high school he pitched a complete game that led Lake City High School to a state championship in his sophomore season.

“He’s always played above his age,” Brady said. “He’s never played at the same level as his peers.”

He also carried his success on the field into the classroom with a 4.1 GPA in high school and was once named the Lake City High School Scholar Athlete of the Year.

In his first season at WSU, Kodie started the season opener at third base against Saint Mary’s on Feb. 15 as a freshman and hasn’t looked back since. He got his first career hit in that game and admitted it was tough to control his emotions in his first collegiate game.

“It was a little nerve racking, but I’ve settled in,” Kodie said.

Brady said he wanted his son to start right off the bat and wasn’t surprised when he did.

“I’ve seen the work he’s put in and there is not a kid on this team that’s been beat on harder than him,” Brady said. “I rode him to the point where he probably should have quit. It was not easy being that young man in my house.”

When Kodie began receiving scholarship offers in high school, WSU stood out among the rest due to the coaching staff, proximity to home, and the fact that the school offered the major he wanted to pursue — kinesiology.

Kodie said his transition to Pullman has been smooth, but the hardest part was getting used to being away from his family. He also said he has to adjust to the speed and level of play in college.

“There’s nobody bad anymore or average, everyone’s good,” he said. “There’s not a weak link.”

Kodie is just one of 17 freshmen on the team. He said the highly touted class is looking to bring a new energy to the Cougars that will hopefully turn the program around and help them compete for a Pac-12 Championship in the future.

Brady said his son has always been a quiet leader that tries to lead by example.

“He’s a hard kid to explain because he’s not your typical athlete,” Brady said. “He doesn’t think he’s better than anybody.”

Kodie had his best game of the season so far against Santa Clara on Sunday. He went 3 for 5 and had three RBI to help lead WSU to a 10-6 comeback victory.

Hawkins said he’s tried to watch Kodie play this season every chance he’s gotten and his impact has been undeniable.

“I’m sure on his team … the guys don’t look at him as a freshman,” Hawkins said. “He doesn’t do freshman things. He’s a little ahead of his time.”

Hawkins said down the road he sees Kodie being a mentor to other players on the team who want to emulate his work ethic.

After college, Kodie is hoping to go to graduate school and become a physical therapist. Hawkins thinks he could have a future at the next level.

“There’s not a lot of guys like him in professional baseball anymore … he’s a grinder,” Hawkins said. “He’s a guy that’s going to come in and do everything right.”

Hawkins said he is planning on watching Kodie play in-person when WSU visits University of Nevada, Las Vegas for a two-game series March 12-13.

Hawkins has become a soundboard for Kodie and is always available when the freshman needs him.

“Uncle LaTroy is there, all he has to do is text me or call me,” Hawkins said.

Brady said the attitude his son carries with him can’t be beaten and it’s his turn to show everyone what he is capable of.

“He wants to succeed for himself and he knows at this point in his life this is about him,” Brady said. “I’ve done everything for him that I could … but he knows now it’s on him.”