Music festival will commence this weekend 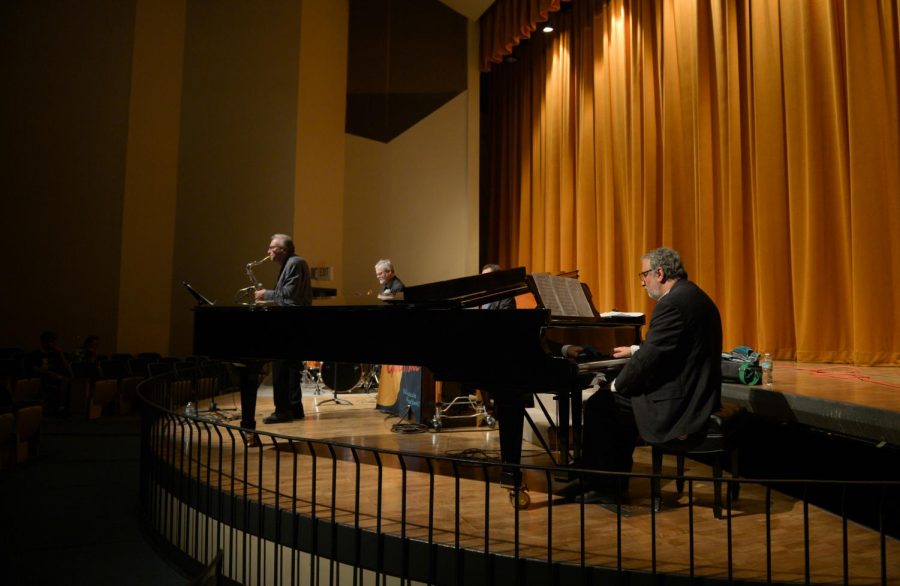 Percussionist David Jarvis and Saxophonist Greg Yasinitsky play on Tuesday, Sept. 12, 2017 at Kimbrough Concert Hall. Several of the concerts in the Festival of Contemporary Art Music will take place at Kimbrough. Admission is free.

The Festival of Contemporary Art Music will commence with its first concert this Thursday at 8 p.m. This will be the first of six, and the festival will take place on Thursday, Friday and Saturday.

Sandra Albers is the performing arts facilities coordinator for the school of music. This year, she said they have tried to expand the festival so that instead of focusing on one big composer they will highlight multiple.

“Between 20 and 30 different composers will be represented in the six concerts that happen over the three days and they come from across the United States,” Albers said. “Some of them are traveling to either perform or hear their music.”

The first concert will be at the Bryan Hall Theater. There will be three parts to the program. The first part will feature four music pieces from “The String Project” played on the tenor saxophone, violin, viola and cello. Afterwards, WSU professor Keri McCarthy will play “Still Life” on the oboe. An intermission will follow, and then “The Devil’s Tale” by composer James Stephenson will play, concluding the concert. ­

The second concert will be at the Kimbrough Concert Hall on Friday from 3-4:30 p.m. “Plectrum” will open and will be followed by “The First Journey,” among other compositions. McCarthy will end the concert with “All This Talk of Saving Souls.” This concert will feature electronic music, sometimes mixed in with typical string instruments like the cello.

Also on Friday, the third concert will be at the Bryan Hall Theater from 8-10 p.m. “Glimmers of Hope” will kick off the evening. It features both trumpet and organ. This will be followed by Lisa Neher singing “American Waters,” after which the pieces “The Sun and the River” and “Harkening 1” will be performed. Multiple pieces will conclude the third concert, marking the halfway point of the festival.

The next three concerts are all on Saturday.

The fourth concert will be Saturday at the Kimbrough Concert Hall from 10 a.m. to 12 p.m. This performance will feature cello, percussion, fixed-media electronics and the baritone saxophone. The first song played will be “Cello Suite.” Other pieces being played during this concert will include “This is Not a Farewell” and “Transfiguration,” among other pieces.

The fifth concert will commence at the Kimbrough Concert Hall at 3 p.m. and will conclude at 5 p.m. For the finale of this concert, the WSU Percussion Ensemble will play Wynwood Project No. 2 for Percussion Orchestra.

The sixth and final concert will end the festival right where it started at the Bryan Hall Theater from 8-10 p.m. Jeffery Savage will be on the piano, playing “Three Sketches.” The last songs of the festival are, in a nod to the beginning of the festival, composed by Stephenson. “Sonata for Oboe and Piano” will lead into the intermission, while the final song played is “Symphony #1,” and will be performed by the WSU Symphonic Wind Ensemble.

These concerts are sure to be a smash hit, and at the low, low price of “free,” it doesn’t hurt to check at least one of them out.