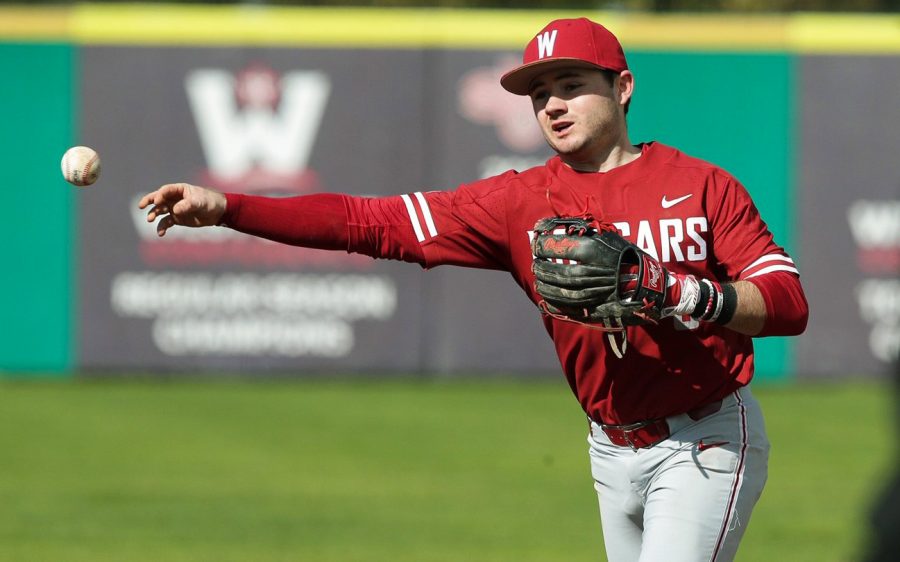 Junior right-handed pitcher Dylan Steen throws a pitch in a game against Saint Mary’s. The Cougars travel to Reno, Nevada, for their third series of the season.

WSU baseball will travel to Reno, Nevada on Thursday looking for its first series win when they take on the University of Nevada, Reno.

The series was originally scheduled to be played in Pullman but had to be moved to Reno due to snowy conditions in Pullman.

The Cougars (2-6) are coming off a four-game series split against Santa Clara this past weekend, where they captured the series opener and finale.

During the series against Santa Clara, the Cougars saw significant improvement from their opening series, during which they lost all four games against Saint Mary’s.

White retired the first 15 batters he faced and only allowed a hitter to reach base on an error in the sixth inning. He was named one of the top national pitchers of the week by Collegiate Baseball Magazine and earned Pac-12 Pitcher of the Week for his efforts.

Head Coach Marty Lees said his team performed at their best last Thursday but was frustrated with their play Sunday despite winning the game.

“We pitched very well Thursday night with what Brandon White did,” Lees said. “We came in hitting, did a great job and scored 10 runs. Sunday, we were able to grind it out and get some runs scored. We had tremendous defense which helped us win.”

Nevada (6-1) is on a four-game winning streak and swept a three-game away series against Long Beach State this past weekend.

“[We need to] play similar to what we played on Thursday and Sunday against Santa Clara,” Lees said. “Nevada will be the toughest team we face yet.”

The Wolf Pack features a lethal pitching staff, with six pitchers who have an ERA under 2.0 and two who have surrendered zero runs.

“Their opposing hitters are hitting terrible numbers against their pitching staff,” Lees said. “We’re just going to have to play good baseball.”

WSU will have to keep an eye on Nevada’s leading hitter, redshirt senior outfielder Weston Hatten, who is hitting .455 with a .636 slugging percentage.

Nevada will have to watch out for freshman infielders Kyle Manzardo and Kodie Kolden who both played significant roles in the Cougars’ comeback win against Santa Clara on Sunday.

“Kyle Monzardo [is] really fun to watch,” said sophomore outfielder Collin Montez. “It’s like he’s been playing in the league for years already.”

Montez said he was happy with the progress that the Cougars made from their opening series to now.

“From the beginning we’ve grown in confidence a lot,” Montez said. “Hitting-wise, we’ve gotten a lot stronger minded, showing with all the hits we produced against Santa Clara.”

Montez produced five hits, one RBI and avoided a strikeout in the Cougars series against Santa Clara and will be a key factor for the team this weekend.

The Cougars will take on the Wolf Pack in the first of a three-game series 1 p.m. Thursday at Peccole Park.