The Daily Evergreen • May 24, 2017 • https://dailyevergreen.com/5030/sports/a-closer-look-at-the-future-indoor-practice-facility/

A closer look at the future Indoor Practice Facility 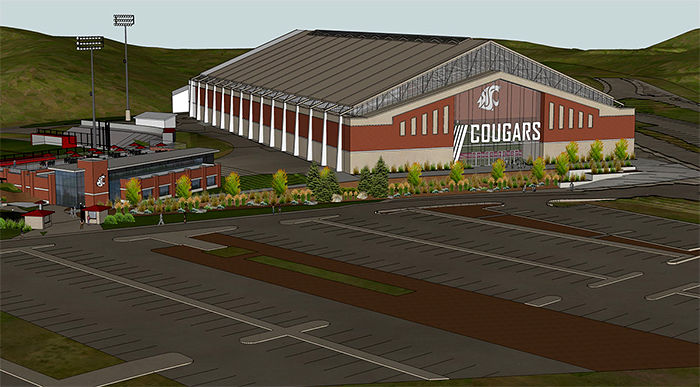 The plans for the renovations are expected to cost about $25 to $30 million.

There’s no doubt that an IPF can be beneficial for recruitment, said John Johnson, senior associate director of athletics. WSU realized this as the Cougars started participating in bowl games around the turn of the century. An IPF was originally desired to sustain the football team’s success, Johnson said.

Johnson made the point that if the Cougars wanted to get ready for an October game in Arizona, for example, they could adjust the temperature and crowd noise inside the facility to accommodate their practice. Creating this kind of game-day atmosphere is nearly impossible without an IPF.

WSU raised close to $14 million to build the bubble, which was supposed to be temporary, Johnson said. The foundation for a renovation is already set underneath the bubble. It’s just a matter of raising the money.

The estimated cost for the proposed IPF is somewhere between $25 to $30 million, Johnson said. However, Johnson makes it clear that this project will not affect the budget.

“The new IPF won’t affect WSU’s athletic budget because it’s not in the budget,” Johnson said.

WSU is moving away from bonds and is using money from donations or fundraisers instead, Johnson said.

According to the Cougfan website, Director of Athletics Bill Moos hinted a little bit at the timeline.

“We’re still going to need individual help on it,” Moos said. “We feel it’s a very important facility for us. We want to wrap up these other ones that are real, real close before we put all of our energies into the IPF.”

Other athletic department renovations include a major upgrade to the soccer field, a new baseball clubhouse, preliminary designs for the swim program and a new academic center, Johnson said. All of this must occur before the bubble renovations can begin.

Johnson said that the new facility will be somewhere around 100,000 square feet. Unlike the bubble, it will include a complete football field, two field goals, a high enough ceiling for kickers, a new playing turf and a new track.

The construction of the new IFP probably will not begin for a few more years, Johnson said.