The Daily Evergreen • May 17, 2017 • https://dailyevergreen.com/5037/sports/the-seattle-mariners-need-an-extreme-makeover/ 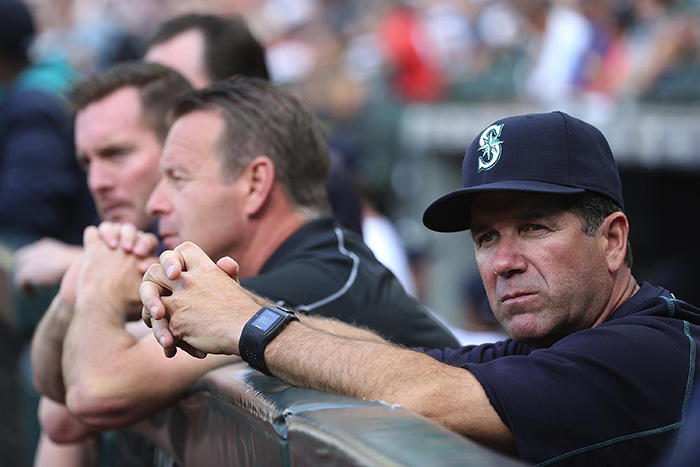 Edgar Martinez, the Seattle Mariners’ hitting coach, watches the field before the action against the Kansas City Royals on June 23, 2015 at Safeco Field in Seattle.

If things don’t change around here fast, the Seattle Mariners’ playoff drought will be getting its driver’s license this fall.

Because baseball is the only professional sport in which teams play 162 games, it’s impossible to determine whether the season is a success or failure less than halfway through. However, the team has been mired with injuries — especially the starting pitchers.

Ryan Weber went down with a strained bicep in his pitching arm in his major league debut, according to The Seattle Times. The injury bug has metamorphosed into an injury virus and if they can’t fight it off, Seattle will have fewer arms in its rotation than Def Leppard’s drummer.

The Seattle Mariners franchise needs a complete 360-degree renovation, and I know just the guy to do it: clubhouse dad, fan favorite, should-be Hall-of-Famer Edgar Martinez.

Martinez, who is currently working as the team’s hitting coach, should be named the Seattle Mariners clubhouse manager as soon as possible.

This organization needs an extreme makeover. I don’t mean just a new player here or there, I’m talking a Ty Pennington makeover, and the first domino to fall is current Mariners manager Scott Servais.

It’s not that Servais isn’t a good manager, there have definitely been worse. It’s just that the average fan can’t identify with this “Average Joe six-pack.” Servais is anonymous in terms of baseball managers.

Sure, he hasn’t had a whole lot of experience compared to guys like Ozzie Guillen, Joe Madden or Terry Francona but in his tenure thus far, Servais has yet to define a culture. That’s what the leader of your team is supposed to do better than anyone.

Do you know who the average Mariners fan can identify with? Edgar Martinez. There’s a reason Martinez has a street named after him in Seattle. He famously produced “The Double,” which happens to be the most hallowed moment in franchise history.

It was the deciding game five of the 1995 American League Division Series against the despised New York Yankees. The Mariners refused to lose in the bottom of the eleventh inning with the Mariners trailing by a run. If they didn’t score, they would be eliminated and talks were ongoing about moving the franchise.

Martinez kept hopes alive, roping a double “lined down the left field line for a base hit” as immortalized by the late, great Dave Niehaus. The old Kingdome exploded as Joey Cora tied the game, and Ken Griffey Jr. raced into the Mariners history books, scoring all the way from first base.

Is it getting dusty in here or is it just me? Every time I hear that golden call, my arms fill with goosebumps. If you’re a true Seattle Mariners’ fan, you know what I’m talking about. In fact, you’re probably listening to Niehaus’ legendary call echo in your brain right now.

This is why Martinez should be named the new manager of the Seattle Mariners. He connects us to our past selves. That’s why we love sports. Every time fans see Martinez, they’re reminded of his imprint on Seattle Mariners baseball. Martinez has history and character, so being a manager would be the perfect fit.

Unfortunately, there haven’t been a lot of playoff games in Seattle since 1995. In fact, the last time the Mariners played a postseason game was in 2001.

There was a lot of hype around breaking that playoff drought this year. After the rough start, the Mariners need a spark.

One of my favorite childhood memories is going to the Mariners fan fest to make my own version of the Niehaus call over footage of “The Double.” That was the first day I really understood the legend of “Edgar,” “Junior,” Jay “The Bone” Buhner, “The Big Unit” and the rest of the heroic Mariners of the 1990s.

I know you are from New Jersey, Mariners General Manager Jerry Dipoto, so you don’t quite understand the fan obsession with Martinez, but you should give him a chance. The Mariners are consistently in the bottom half of attendance in Major League Baseball. Martinez would change that as fast as an angry toss of Lou Pinella’s dusty hat.