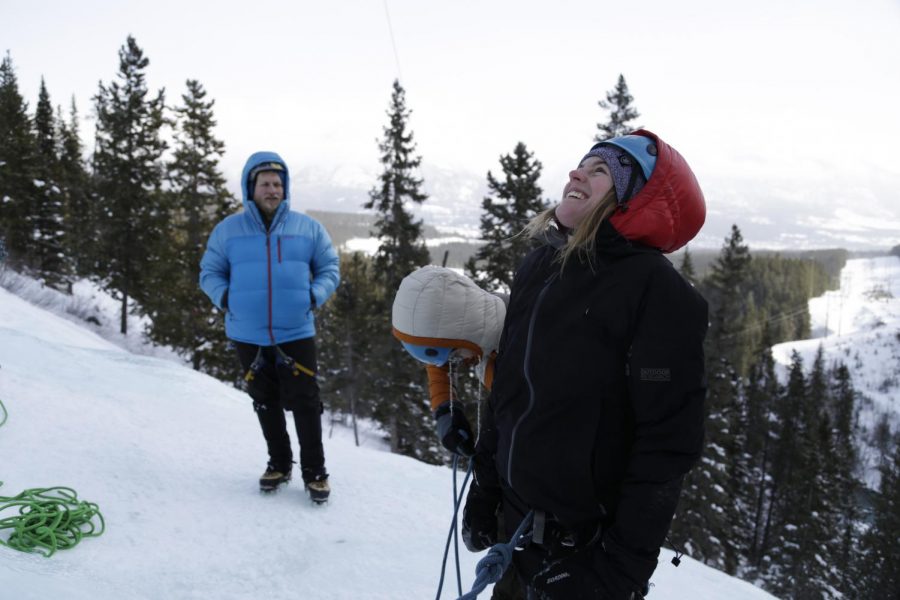 Hannah Kiser,right, an adventure facilitator at the Outdoor Recreation Center, prepares to climb as Wei Ching, middle, WSU second year Sports Management major, sets up to belay her Saturday at the Canmore Junkyards in Alberta, Canada.

The first time I noticed my fear of heights, I was helping my dad put up Christmas lights around our house. We walked along the roof, and as I leaned over the two-story edge, I felt my knees shake and my stomach drop. A wave of anxiety came over me, and I refused to hang the lights over that section of the house.

Since then, my fear affected me whenever I faced a fall. I decided to get over my fear and signed up to join WSU’s Outdoor Recreation Center ice-climbing trip with a group of six in Canmore, Canada. The trip costs $370 for students and was a 10-hour drive to Alberta.

Our climbing day started when we met our ice climbing guide, Jonathan “Jay” Mills, a well-known alpine guide in the Canadian Rockies.

Our group set out for the Canmore “Junkyards” ice sheet, a quick 20-minute walk from the nearby parking lot. Even as I walked out to the climbing site, I could feel that anxiety fester. Despite being excited to learn to ice climb, I started to worry about how I would perform.

To set up our rope routes, Mills had to climb the 45-foot-tall ice sheet unassisted. I knew he was a much better climber than I was, but his effortless pace gave me hope that I could make it up, too.

As we decided who would climb first, I felt nervous. To get out of that first climbing spot, I said I wanted to take photos for a while. I watched as experienced rock climber Elise Bugge made her way up the ice with little to no problems. Bugge is a WSU senior environmental science major and an adventure facilitator at the Outdoor Recreation Center, and she knew what she was doing.

It eventually came time for me to try my hand at the climb. I tied the belay rope into my harness, picked up the ice axes and took a deep breath. I had just started on the more vertical part of the route the first time my crampons, metal cleat-like devices, slipped.

My belay partner caught my fall on the rope, and I still held on to the axes that were embedded in the ice. As I listened to words of encouragement from my group, I started to notice that all-too-familiar knee-shaking and stomach-turning feeling.

I looked up at the ice and replanted my feet. My mind went blank, and I just tried to climb higher. I only made it a few feet higher before my fear overcame me, and I told my belay partner I was ready to be lowered.

In between climbs, I took photos, listened as Mills taught us new techniques and tried to shake off the thoughts of doubt swirling around in my head. I talked with Hannah Kiser, an adventure facilitator at the Outdoor Recreation Center, who also suffers from a fear of heights. I asked her how she deals with her fear.

“Focusing on one step in front of the other and not zoning out, like really being present and paying attention to what you’re doing,” Kiser said.

Mills then told us we could start climbing the near-vertical route in the ice sheet’s center. While the rest of the group was excited to try out the more difficult climb, I instead retreated to my backpack to eat lunch and hoped our day would end before I was obligated to confront the route.

Instead, when I came back to the group, I realized it was my turn. I felt excited but dreaded the endeavor more. I took a deep breath and started the climb. The beginning slope was similar to the rest of the routes, and I didn’t have many problems along that part. During the vertical climb, I started to feel my fear take hold.

I held onto the ice axes like I was trying to crack a nut in my hand. I struggled to sink my crampons into the ice and find firm holds for my ice axes. But about halfway up, the ice beneath my crampons gave way, and I was dangling from my harness and axes.

Pins and needles shot through my legs as I tried to find purchase on the ice again. I trusted my belay partner to keep me from falling, but I didn’t trust myself. After my legs fumbled around, they were able to dig into the ice and allow me to catch my breath.

My forearms screamed with exhaustion, my calves started to twitch and my thoughts begged me to get down from the ice wall. I tried to regain some composure and push through my fear.

I desperately wanted to see to the top of the route, but my fear ordered me to get off the ice. I had yet to make it to the top of any of them. Even though this was the hardest route we had, I wanted to finish at least one.

With every passing second, my fear grew and my confidence shrank. My body and mind shouted over my will, both wanting to be back on solid ground. I hung my head and asked to be lowered from the ice wall.

As my partner lowered me from the wall, I looked again to the top. Once my head cleared, I wondered what the view looked like from up there.

I wish I had been able to ignore what my mind and body told me. When I got to the bottom, my group congratulated me for a good climb. They were excited I tried the route and gave it my best effort. They had no idea about the emotions running through my head at that moment.

It felt isolating, and I wondered if anyone else had the same paralyzing fear that I did. For Donald Schmit, coordinator of rental shop and Green Bikes at the Outdoor Rec Center, fear wasn’t the word he would use.

“It’s less of a fear and more of a healthy respect,” Schmit said.

I let my fear get the best of me, and I didn’t like it. I don’t want this fear to dictate how I live my life. I will make it up the ice sheet, and I will see the view from up there.