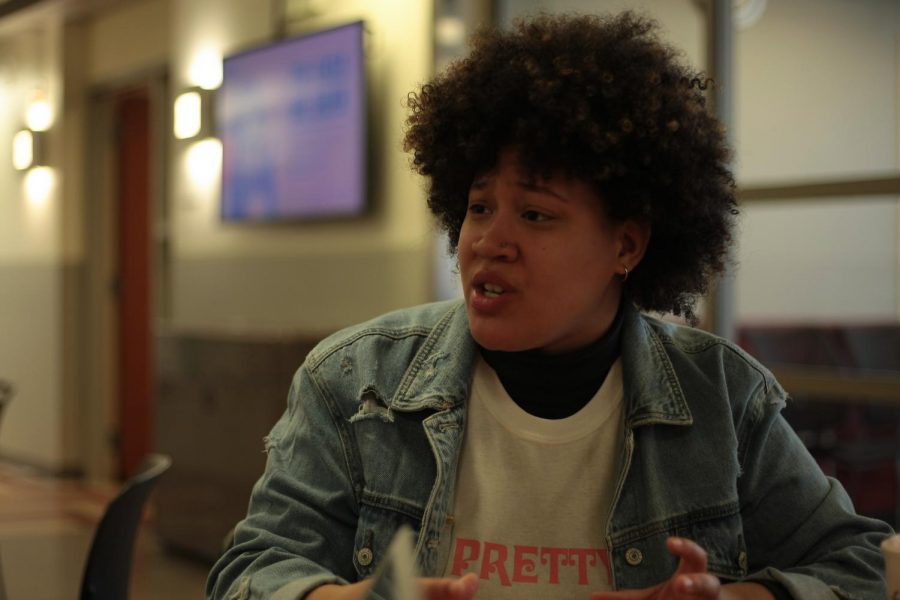 “I started to see how much leadership and being involved at this university would help students,” said ASWSU presidential candidate Mariela Frias-Gomez.

Mariela Frias-Gomez and Camille Naputo want students to feel that ASWSU is open and inclusive to all students.

“A lot of students see us as the multicultural ticket because we are two women of color,” Frias-Gomez said. “But we have been involved in other organizations and communities that aren’t based on multiculturalism.”

She said if they were elected, they would be the first women of color in 104 years. They would work on a number of issues, not just one or two, since students face many issues at WSU.

Frias-Gomez said during her first years at WSU, she got involved with Residence Hall Association (RHA), sat on a few administrative committees and worked on the President’s Student Advisory Board under WSU President Kirk Schulz.

“I started to see how much leadership and being involved at this university would help students with retention rates, with coming back to the university and feeling like they have something to give,” she said.

Frias-Gomez said she is very passionate about helping students, and she has been able to do so over the past three years by being involved on campus. She began planning a presidential campaign last year because she wanted to continue and expand her work of helping others on campus.

Naputo said she was very involved in high school but wanted to continue to be a leader at WSU. She said that as an out-of-state, first-generation student, she wanted to find a community and home on campus.

Frias-Gomez said they are trying to level the playing field for every student at WSU, so that students feel welcomed by ASWSU. She said it has never been that way, and it’s a problem they hope to fix.

Devon Holze, 2018 ASWSU vice presidential candidate, said she supports Frias-Gomez and Naputo because they have a well-thought-out platform, and they care about reaching out to all students on campus.

“In the past, ASWSU has just been limited in its perspective in what students it actually reaches,” Holze said. “But [Frias-Gomez] and [Naputo] actually care about reaching out to all students.”

With Frias-Gomez’s experience in residence life, Holze said, Frias-Gomez can reach out to students who are not as involved on campus and make sure their voices are heard as well.

“We ran on a slogan ‘IMAGINE’ because we want students to imagine a better WSU,” Frias-Gomez said. “We want them to help us create it.”

She said the work and plans are already there, but they just need the platform to execute them — all they want to do is be put to work.

“When we sat down, we thought about what we wanted to stand for,” Naputo said. “Not everyone is included in the conversation. Whether it be our international students, our indigenous students, veterans or people who have to commute [to campus].”

Frias-Gomez said she does not think their plan is too much to accomplish, as long as every pillar has at least one tangible thing that can be accomplished within six months.

“We are not just telling you what we want to do,” Frias-Gomez said. “We are showing you how we want to do it.”

Their seven pillars are in the form of an acronym: Increasing transparency and accountability; Multicultural and diversity affairs; Academic and professional development; Generating student advocacy; Increasing student programs and outreach; Navigating campus wellness, climate and safety; and Environmental and community affairs; according to their website.

“Why aren’t we focusing enough on our STEM majors and research students?” Frias-Gomez said. “Their equipment is 15-plus years old, and we are focusing on getting a new baseball [facility].”

She said international students, STEM and liberal arts majors must get more recognition if WSU wants to accomplish the “Drive to 25,” the university’s effort in becoming one of the top 25 research universities in the country.

Naputo said when focusing on issues like mental health, they want to provide resources for everyone at WSU, not just a small group of people.

She said they plan to focus on mental and behavioral health, as well as the beginnings of these issues because that is often left out of the conversation. She said they want to help individuals act proactively with mental health issues and catch the signs early on.

“We want to find a way to invest in peer-to-peer support groups. That is more resourceful and that is less money,” Frias-Gomez said. “Cougs help Cougs.”

She said it should mean more than just helping someone if they fall. It should expand to students helping each other through bigger issues. They hope to work on finding a way to help students with mental and behavioral health issues that is both effective and resourceful.

“Our generation has lost a lot of empathy,” Frias-Gomez said. “If one person has gone through the recovery process and they go and help another person, they are going to be so much more empathetic of helping another Coug throughout that process.”

Naputo said there are a lot of issues within the structure of ASWSU itself. She said there is a strange hierarchy within ASWSU in the Senate and as a whole. She hopes to make sure that senators have the tools, training and knowledge they need to be successful, if elected.

She said ASWSU is supposed to be a team that works to better the university as a whole. If elected, she wants to have one-on-one meetings with senators to help them get adjusted and provide them with resources.

“If we really work at the core of ASWSU and the structure and the team work and the environment,” Naputo said, “then it will manifest into something bigger, something powerful, something inspiring.”

She said student leadership is not supposed to be self-serving. It is about helping others and bringing people together to accomplish goals.

“The Senate is always a reflection of the pro tempore and the vice president,” Naputo said. “We are supposed to be helping and empowering one another.”

She said by making student government more fun and less intense and divided, people will want to make a change and not just participate to put it on their resume.

Frias-Gomez said she is an extrovert and Naputo is detail-oriented. She said they are a good balance, and that Naputo will keep the Senate organized and focused. She will lead the directors to be more loose and have fun to excite people on campus.

Naputo said she hopes to help make WSU more accessible and easier to navigate for international students. She hopes to initiate this by adding more languages to signs in large buildings on campus such as Todd Hall or the CUB.

Frias-Gomez said she hopes to work on making the campus more culturally aware and more accessible for students of all backgrounds. If elected, she hopes they can help unite students of different backgrounds, work on these common goals and collaborate together.

“We need to be more comfortable being uncomfortable,” she said. “That is going to help this university thrive.”