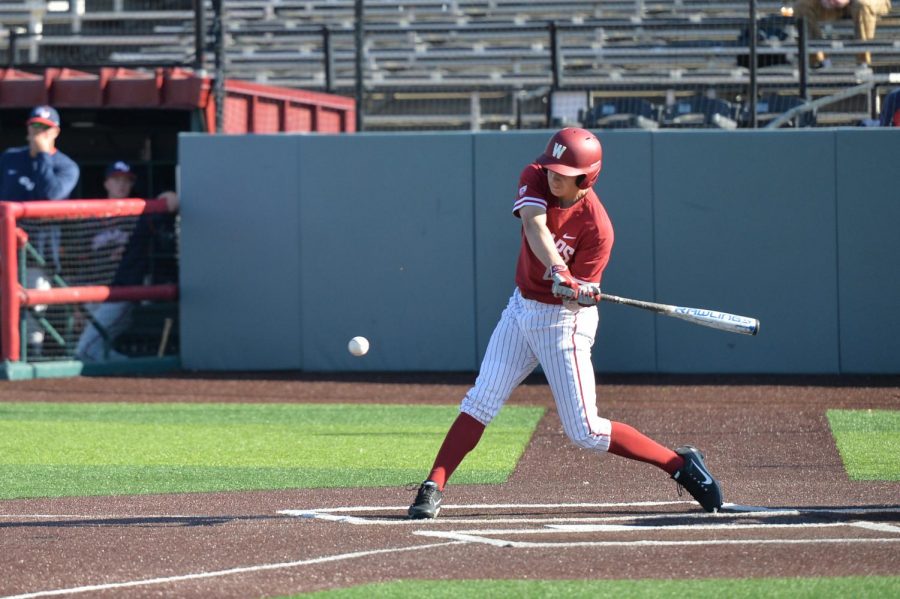 WSU baseball took down University of Nevada, Reno 3-1 on Saturday to claim two out of three games in the series.

Sophomore right-handed Hayden Rosenkrantz got the nod for the Cougars (4-7) hoping to pick up his first career win.

After recording two quick outs in the first inning, Rosenkrantz got into some trouble but worked out of the jam to keep the game scoreless.

Freshman infielder Kyle Manzardo collected WSU’s first hit of the game with a hard line drive in the second inning but the Cougars couldn’t produce anything else on offense.

Three innings in the books and Rosenkrantz was dominating the Wolf Pack (7-3) lineup and had a pitch count of just 34. However, WSU still had just one hit and couldn’t seem to figure out Nevada freshman right-handed pitcher Owen Sharts.

Despite the lack of offensive production in the first three innings of play on both sides, WSU loaded the bases with nobody out in the fourth and would take a 2-0 lead.

In the bottom half of the fourth, Rosenkrantz got into trouble again with runners on second and third base with nobody out. He would strike out two hitters in a row and force a popup to keep the Wolf Pack scoreless.

Rosenkrantz would finish the game with five complete innings, giving up five hits, no runs and striking out four.

Freshman left-handed pitcher Tyson Guerrero made his fourth appearance on the year in the sixth inning and got into a jam. However, Nevada made a mistake sending a runner toward home plate and Teel made the tag to help the Cougars maintain a 2-0 lead.

For the first time since the fourth inning, WSU reached base in the seventh when Sinatro hit a triple down the right field line. Sinatro would score off a throwing error to increase the Cougars lead to 3-0.

In just about every inning, Nevada got into scoring position but could never produce any runs until the bottom half of the seventh. Sinatro made a diving effort but couldn’t make the catch as Nevada sophomore infielder Joshua Zamora hit an RBI single to make the score 3-1.

The Cougars and redshirt junior right-handed pitcher Davis Baillie shut down the Wolf Pack in the final two innings to secure the WSU victory.

WSU only had five hits in the game while Nevada had nine.

The Cougars return to Pullman 4:05 p.m. Friday for their home opener against California State University, Northridge, at Bailey-Brayton Field.