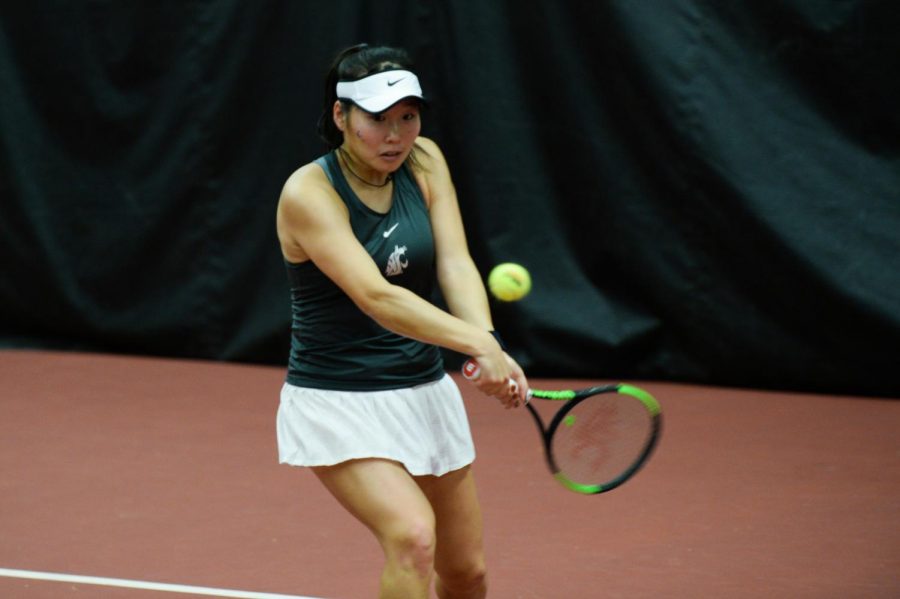 Senior Hikaru Sato returns a ball during doubles play against Seattle U on Feb. 22 inside Hollingbery Fieldhouse.

No. 31 WSU tennis earned a pair of victories over host Nebraska and Iowa State on Saturday in Lincoln, Nebraska.

The Cougars (13-2) took down the Cornhuskers 4-1 first in the afternoon. WSU opened the match by claiming the doubles point as duos senior Tiffany Mylonas and freshman Hikaru Sato and junior Melisa Ates and freshman Yang Lee dominated their respective matchups.

In singles matches, Miksovska put the Cougars up 2-0 by taking down Nebraska freshman Jessica Aragon in straight sets.

Freshman Savanna Ly-Nguyen claimed a 7-5, 6-2 victory over Nebraska junior Jeannie Lozowski to put WSU in a position to clinch the match.

The Cornhuskers wouldn’t go down without a fight, though, as junior Claire Reifeis topped Mylonas 7-6, 6-1 to extend the match and keep Nebraska’s hopes of winning alive.

Sophomore Michaela Bayerlova, the No. 35 ranked player in the nation, crushed their hopes quickly with a straight set win to clinch the match for WSU.

The Cougars tried to carry the momentum from their win against Nebraska into their matchup with Iowa State in the evening.

Unfortunately, WSU dropped its opening doubles match as Knezevic and Miksovska fell 6-1. But the Cougars were able to rebound and claim the remaining two doubles matches to take a 1-0 lead.

WSU dominated the singles matches against the Cyclones, sweeping all six to secure a 7-0 win. The Cougars only dropped one set in singles when Bayerlova lost the opening set to her opponent 6-2.

With a pair of singles victories this weekend, Miksovska is now tied for fourth with Ksenia Googe on the school’s all-time singles win list with 92.