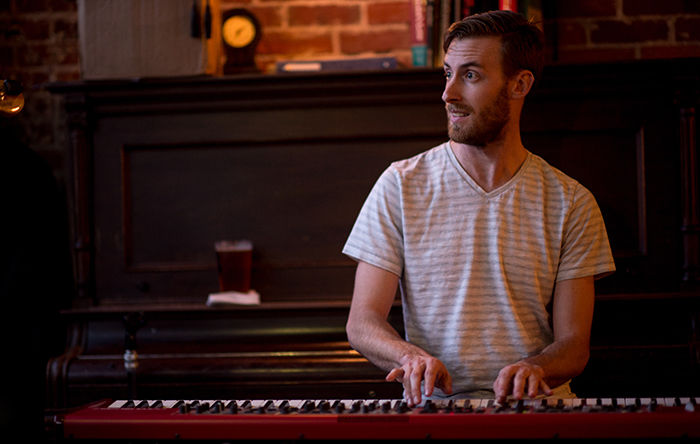 The Erik Bowen Band has been an integral piece of the Palouse jazz music scene for the better part of the past decade.

“I’m the guy who started the Open Jazz Jam in 2011. It’s the sixth year anniversary in August,” Bowen explained about the weekly music night held Thursdays at Bucer’s Coffee House Pub in Moscow.

Lewiston-native Bowen is the pianist in a three-piece jazz group that has been playing together for the past three years.

The other band members originate from different parts of the Pacific Northwest. Stephen, the bassist, is originally from Boise, but currently lives in Lewiston, Bowen said. David, the drummer, is from Portland, Oregon. Bowen said David moved to Pullman in high school, but is currently attending the University of Michigan in Ann Arbor.

Bowen has a lengthy history with the local coffee house pub that has been open since 2000. The musician said he has played there since 2003.

“We’re lucky enough to have an owner who is supportive of live music,” he said.

Thursday presented a lively evening at Bucer’s, as there were people studying, reading, writing, texting, drinking coffee and beer, laughing and most importantly, listening to some quality jazz tunes. The band was animated and joyful as they serenaded patrons with “If I Only Had a Dream,” which I thought was the highlight of the night’s set.

David banged solos on his Sonor drum set that were reminiscent of a cloud of bees all trying to escape the hive at once.

Stephen was the reliable presence at bass as he set the band’s tone for the night, a human metronome whose rhythms poured over the audience like sand from an hourglass.

“My only rule is there’s no books allowed so all the music has to be memorized,” Bowen said about the importance of improvisation in jazz. “As soon as you start reading from a book, it’s a distraction away from the conversation the music is supposed to be having.”

And it was a thoroughly delightful conversation between the audience and musical act that took place during last Thursday’s Open Jazz Jam.

Minutes before taking the stage to rain down sweet jazz harmonies on coffee-drinking clientele, the band’s lead pianist dropped an enduring piece of wisdom that will last a lifetime.

“You keep a box in your car with a spare of everything you may need, and it just lives there. You don’t ever take it out unless you need it, and then it immediately goes back in the box,” Bowen said. “If I change cars to go to a gig, the box comes with me because the worst thing is if you’re five hours away or in the middle of nowhere and something doesn’t work — then you have a spare that does.”

I came to Bucer’s Open Jazz Jam expecting to just listen to some sugary jazz melodies, but was pleasantly enlightened by the philosophies of Moscow’s wisest musician.