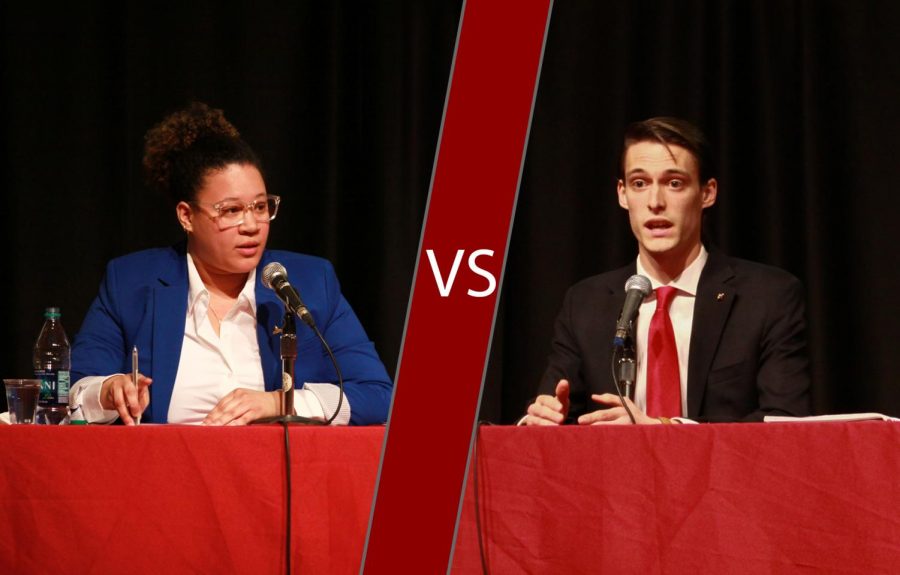 Presidential candidate Mariela Frias-Gomez and her running mate Camille Naputo put an emphasis on making ASWSU a more inclusive institution that will better represent students of color and be held to higher levels of accountability.

Frias-Gomez said issues faced by multicultural students and students of color often go unheard and unnoticed at WSU. She said that as representatives of the student body, they must create an open environment for all students and cannot pick and choose issues.

“We want to work harder to approach students,” Berkompas said. “ASWSU needs to be more connected with the community.”

He said that even with massive cuts to the ASWSU budget, it does not cost a thing for representatives to reach out and speak with students about the issues they are facing on campus.

Candidates from both tickets agreed there must be more transparency and accountability regarding university spending.

“A lot of times the administration will move forward [with funding] regardless of student opinion,” Berkompas said.

Frias-Gomez said students deserve to know where the money they pay in fees and tuition is spent and how it is affecting them.

Candidates from both tickets disagreed with the approval of funds for construction of the new baseball facility, a proposal back in January in which the university agreed to loan $3.5 million to WSU Athletics for a baseball clubhouse.

Frias-Gomez said slow, off-campus bus routes cause difficulty for students when traveling to class. She added that parking pass prices are far too expensive.

In reference to the increase in transportation fees, Berkompas said students feel like they are being asked for more money without knowing where it is going.

“Maybe the problem is not with funding,” Berkompas said. “Maybe there is a fundamental flaw in the [transportation] system.”

Both campaigns spoke about a need to address mental health on campus as a recurring topic in the debate.

Berkompas said the state of mental health on this campus and across the country was a “crisis.”

The candidates from both tickets agreed the university was not adequately addressing a mental health crisis, citing a lack of resources and counselors on campus.

Naputo said the way the university has addressed mental health following the suicide of Tyler Hilinski was like putting a bandage over the issue without the promise of any effective solutions.

“The current system is failing us,” Prescott said.

Berkompas said the university needs to bring in more resources and counselors to campus, so students can receive help and support when they most need it.

Candidates from both sides also agreed that more needs to be done on campus to prevent sexual assault and support its victims.

“I don’t think we have a culture that supports survivors of sexual assault coming forward,” Berkompas said.

“We need a student-led coalition to tackle this issue,” Berkompas said. “We all want to see rape culture end, but we are not taking the steps to end it.”