‘Here, I found my passion’ 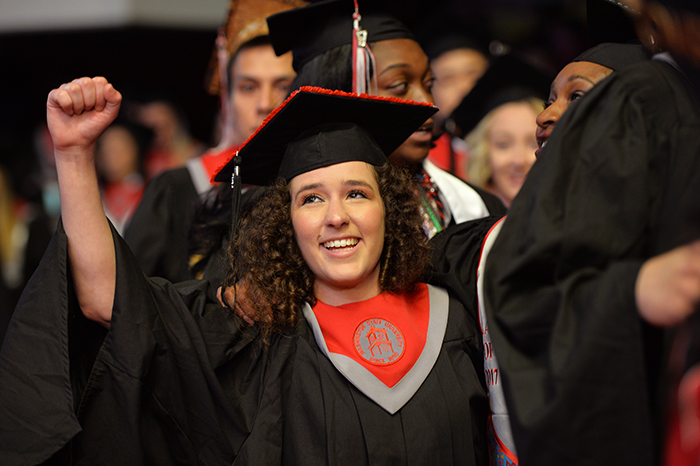 Allison Borgida walks with other graduates across the stage during commencement at 3 p.m. on May 6 at Beasley Coliseum.

The students of the first spring WSU commencement gathered outside Beasley Coliseum at around 7:30 a.m. on May 6, with most of the warmth coming from their friends and family. It was a cool, overcast and drizzly morning, a setting which did not reflect the graduates’ demeanor.

It was a day for the graduates to look back on their individual accomplishments.

Kevin Lee, an animal science major who transferred to WSU two and a half years ago, said he plans on getting a master’s in Colorado and later going to veterinary school.

“[This is] exciting, I never thought I would graduate,” Lee said. “Once I came here, I didn’t know what I was going to do. Here, I found my passion.”

Kevin Schilling, a history major and former ASWSU senator, said that to him, WSU means connection and perseverance.

“WSU brought me together with individuals who had made strides to be better,” Schilling said. “I will take that with me to graduate school and beyond.”

Though there was some confusion and a start time of 20 minutes later than the originally scheduled time, the first commencement began with the entering of a small procession. The event’s first speaker was President Kirk Schulz.

“I join everyone here in congratulating today’s graduates.” Schulz said. “We are proud of each and every one of you and wish you the best of success in the future.”

GPSA President Melanie Thornton then came to the podium to speak on part of the graduate and doctoral students.

“You are also a part of the only group motivated enough to be a student for at least 20 years,” Thornton said. “As a student, you have been taught to question everything. Never give up on your aspirations and dreams and never stop questioning.”

“I originally wanted to be a music teacher, but decided I was passionate about helping my Latino community,” Diaz said. “I hope to be an advocate for the immigration community as an attorney. I ask for safety and prosperity to all our Cougs regardless of their immigration status.”

Tyler Cruz, a first-generation computer science major, wore the stoles for his fraternity, Lambda Phi Epsilon, the multicultural center, the Marshall Islands and a red and white honor cord for his 3.66 GPA.

“Wow, I’m done, this is real,” Cruz said. “All those years of hard work and studying and all that, I’ve finally done it, it all payed off in a way.”

ASWSU President Taylor Christenson also offered her words of wisdom to the graduates.

“A dear friend who graduated from WSU two years ago said to me, ‘too many people in those seats race off to climb the next mountain. I challenge you to take one leap, maybe more, to celebrate the peak you’re on,” Christenson said. “Enjoy this view, because, dang, you deserve it.”

When the procession of speakers had been exhausted, the certificates had been handed out and the confetti had flown, Provost and Executive Vice President Dan Bernardo pronounced the graduates as officially commenced from WSU at approximately 10:20 a.m.

“It was everything I thought it would be and more,” Rodney Bauder, an agricultural science major, said.

When asked what his plans were for the rest of the day, Bauder said, “Celebrate, have a bunch of food, and have one last hurrah [with the family].”