The Daily Evergreen • May 10, 2017 • https://dailyevergreen.com/5102/culture/renaissance-fair-welcomes-spring/ 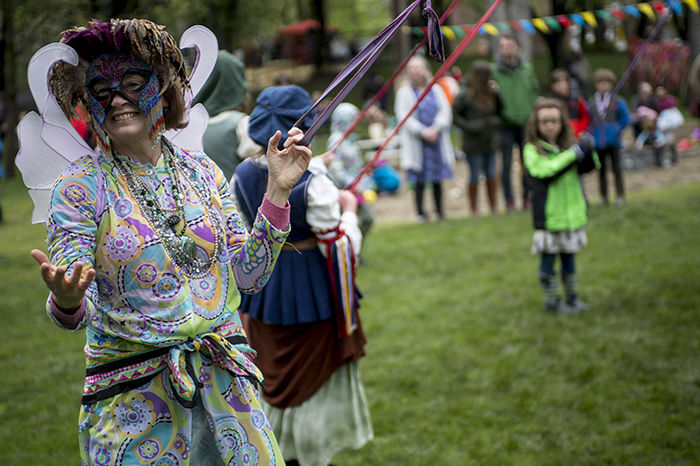 Attendees participated in a maypole dance on Saturday at the Moscow Renaissance Fair at East City Park.

Through rain, snow and once even ash, the Moscow Renaissance Fair has taken place the first weekend of May since 1980. The fair itself dates back to the 1970s, and this year is its 44th.

Clutching a handmade coffee mug from one of the vendors, Willow Falcon, president of the Moscow Renaissance Fair Board of Directors, gazed across the stage, her sharp eye noticing the banners and decorations carefully hung.

“There are a lot of things that could be called Renaissance. There’s the Renaissance time period, which we don’t identify as much as we do Renaissance of spring,” Falcon said. “The weather warms up, you start to feel good and fresh and new, and if that’s not a reason to celebrate, I don’t know what is.”

The fair itself began as the Blue Mountain Rock Festival in the early 1970s, which became infamous for getting out of control and having so many attendees that former UI President Ernest Hartung banned it from campus.

Students still wanted to create a community tradition, so the Moscow Renaissance Fair was born as a more acoustic, artisan craft fair alternative to the hippie rock and roll of the previous festival.

“After the school year is out, and the weather warms up, people need an event to have a lot of fun,” Falcon said. “It’s a lot of community involvement. There are so many people who’ve done a small piece of the fair for so many years that it’s really a collaboration.”

Some attendees of the fair wear kilts and fairy wings while others dress up as medieval kings, queens and princesses.

Because admission to the fair is free, it’s the perfect family event, Falcon said. There is a specific part of the fair reserved for kids with plenty of activities to keep them entertained. There is a maypole dance, petting zoo, sand pit, science booth, maze, roving performers, a youth stage and even a dragon.

“Basically,” Falcon said, “if you are a kid and you go into the kids area, you will not want to leave.”

Vendors come from all around the Pacific Northwest, and for most artists, this fair kicks off the spring and summer seasons when they sell most of their wares. Artists who make a living by making and selling their art usually work in the winter to make stock and tour in the spring and summer.

Some artists have been touring the same shows in the Pacific Northwest for quite some time and have built their own little community. The Moscow Renaissance Fair is the first fair of the season, and also serves as a reunion for the vendors.

Toni Spencer, an artist who sells her original and print batiks, has been coming to the fair for over 20 years. Batik is a technique where melted wax is applied to a fabric, which is then dipped in colored dyes. Continuous dipping and then subsequent removal of the wax reveals an image made unique by cracks in the wax.

“We keep coming back because of the people and the food. The customers are friendly, cool people,” Spencer said. “The music is good, too, and it’s a fun fair for us. Every friend we have is an artist. No matter the weather, people come.”

The fair really is for everyone and is the perfect way to ring in spring as well as the end of the school year. The food, like the wares, must be handmade. Many non-profit groups make and sell food, elephant ears being the most popular.

So the next time the fair rolls around, always on the first weekend of May, dress in a fantastical costume and enjoy the nice weather, live music, tasty food and artisan crafts.