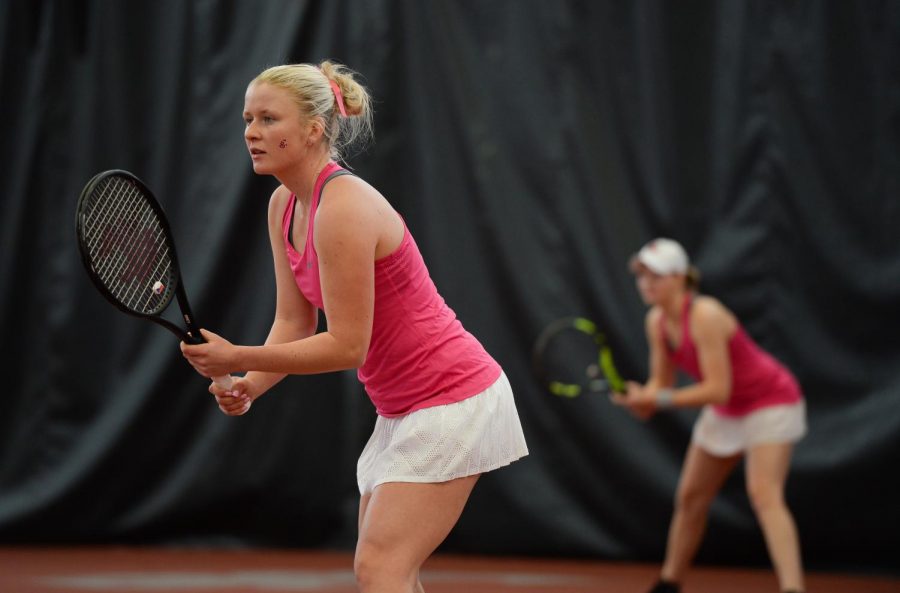 After they led a successful charge this season, the No. 31 Cougar tennis team has another series of road games coming this weekend when they face both Utah and Colorado.

Head Coach Lisa Hart is looking forward to when they face the upcoming Pac-12 teams.

“We’re excited to finally start conference play,” Hart said. “This is kind of a different team than what they had two years ago.”

After a 2-5 loss to Gonzaga, the Cougars had three revival matches on the road to snap them out of the tough single loss. WSU grabbed its first comeback win against Kansas State 4-2, then continued to beat Nebraska 4-1 and Iowa State 7-0.

After these road wins, Head Coach Lisa Hart said she has high hopes and expectations for the rest of season. She said they have more work to do.

“As a team, I don’t think we’ve even played our best tennis yet, which is really exciting,” Hart said. “But I think we’re definitely competing well.”

When they travel south at the end of winter, the Cougs will face two Pac-12 conference teams — Utah and Colorado.

The Utes (7-2) are coming off an away-game series, during which they beat both Wisconsin and Minnesota 4-3. They celebrated their most recent win at home when they defeated Western Michigan 7-0 for their fourth 7-0 shutout win of the year.

The win against Western Michigan was the first of the Utes’ three-game home series. They will host the Cougars and the University of Washington this weekend.

After the match in Salt Lake City, Utah, the Cougars will travel east to Boulder, Colorado. They will play against the Buffaloes on Sunday, with a day of rest between the previous match in Utah and the contest.

The Buffs most recent contest was a 3-4 loss against Boise State, a team WSU will face later this season and one the Utes already beat 5-2. Colorado will face the Huskies prior to the match against the Cougars.

The last time both the Utes and Buffaloes faced the Cougars was last season, resulting in a pair of 4-0 wins for WSU. However, only two seasons ago the Cougs lost to both teams 3-4.

Freshman Savanna Ly-Nguyen decided to forget about the previous losses and was more excited to see the success her team is having so far.

“I’m not really concerned about the past,” Ly-Nguyen said. “Right now I just know that our team is on a role, we’re doing really great and I believe we can keep on winning.”

The first match will be in Salt Lake City at 11 a.m. on Friday where the Cougars will face the Utes before they travel to Colorado to face the Buffaloes at 9 a.m. on Sunday.