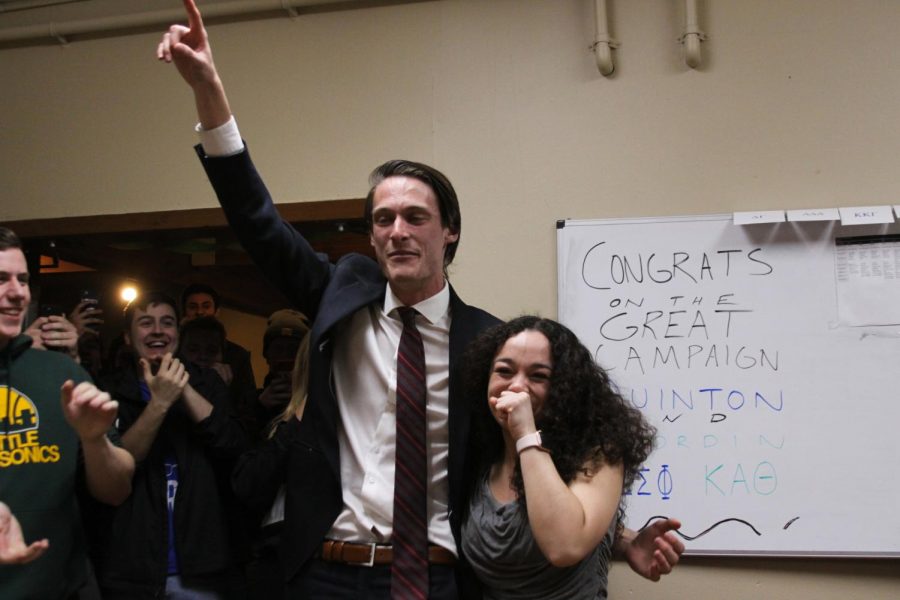 The Quinton Berkompas and Jhordin Prescott campaign received over 2,400 votes, which won them the ASWSU election. Out of the total votes cast, 52.3 percent of students voted for Berkompas and Prescott, according to the official election results.

Berkompas and Prescott held an election viewing party at the Delta Sigma Phi fraternity house. They awaited results there with supporters and friends.

A loud knock on the door silenced Delta Sigma Phi. ASWSU President and Vice-President Savannah Rogers and Tyler Parchem walked in with the news that they had won, and the house erupted.

The people in the room knew what their arrival meant before Berkompas and Prescott were handed their envelopes, and Parchem played “Congratulations” by Post Malone on his phone.

“I am literally so ecstatic. I am excited. The fact that we did this is incredible,” Berkompas said. “We had so much help from everyone. I can’t put words to it.”

Prescott said she did not feel any emotions all day until she walked into the election watch party.

“I feel like I want to cry happy tears,” Prescott said. “But honestly I’m just so grateful for the opportunity and humbled by the experience. I’m just happy the hard work paid off.”

Maasberg said they tried to focus their campaign on making contact with students and prioritized advertisements on social media in an attempt to get people to vote. He said they felt good, and worked hard enough to win.

Berkompas said they started out their days at bus stops at 7 a.m. and stayed on campus walking around and talking to people until 1 a.m.

He said they are looking forward to getting a head start on their mental health and sexual assault prevention plans.

Prescott said she is expecting her days to get a whole lot busier. She is looking forward to working with Rogers and Parchem in the future.

“This is an amazing journey and I’m so happy it ended right,” Prescott said.