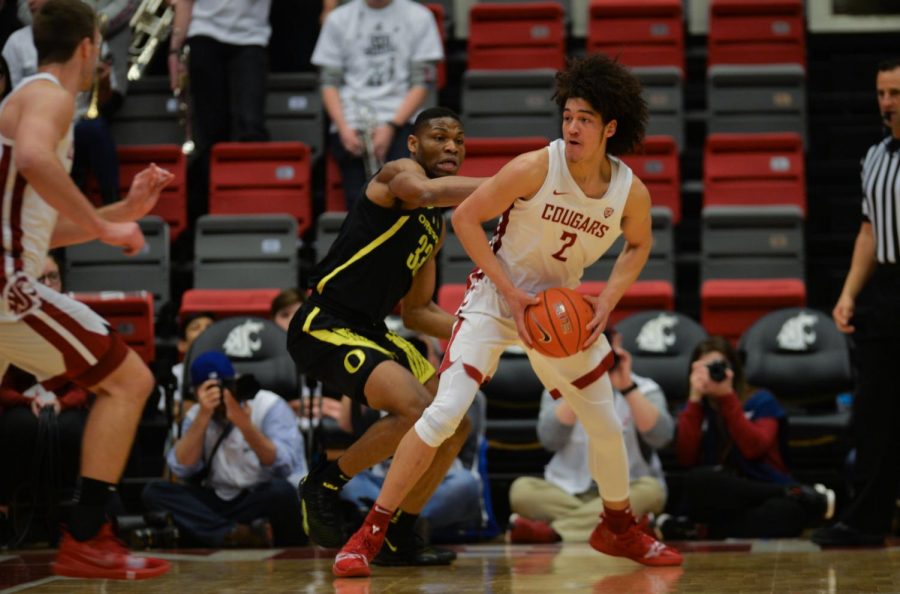 Head Coach Ernie Kent wasn’t thrilled about the performance of his team tonight.

“As a team we didn’t play really well,” Kent said. “We had too many breakdowns and it cost us. When you got 17 turnovers, that’s a difficult pill to swallow,” Kent said.

Both teams got off to hot starts with Oregon knocking down a pair of threes and shooting 50 percent while the Cougars shot 75 percent in the first four minutes of action.

Senior forward Robert Franks was on a roll just five minutes into the half, leading WSU with five points and also making a monster block behind Oregon’s center which more than likely would have been a personal foul if it came from any other player.

The Ducks fell into a bit of an offensive drought but WSU knocked down four of their last five field goals as they neared the 10 minute mark. This put the Cougars up by two points midway through the first half.

Sophomore small forward Marvin Cannon continued to look unguardable like he did in the previous homestand as he maneuvered around the Oregon zone making a couple of reverse layups in the process, reclaiming the lead for WSU.

Oregon played very physical trap defense after they couldn’t contain the Cougars with their zone defense. This reduced the Cougars’ original 75 percent shooting down to 39 percent with six minutes left before halftime.

At the conclusion of the first half, WSU shot a low 36 percent while the Ducks stepped up their offense and led by a score of 41-30. Cannon led the Cougs in scoring with eight points.

It was hard to find any positives on defense as well as they let the Ducks quack right past them down the lane allowing them to score easily.

WSU got off to a hot start on offense to start the second half like they did in the beginning of the game with their defense looking sharp as well. Oregon opened the half shooting 0-5 through three minutes.

Oregon got themselves in a defensive groove five minutes in, forcing the Cougars four turnovers in four minutes, two huge blocks and three steals.

Beasley Coliseum lacked any kind of atmosphere which clearly carried over to the Cougars who played with little focus or energy as time winded down. Soon, the Ducks began to carry the game away.

With just ten minutes left in the game, WSU started to get sloppy and committed multiple fouls on both ends of the court which caused the lead to exceed into double digits.

WSU was having a rough night finding the basket on offense. Franks shot 2-11 with eight minutes left and the rest of the team hovered around the 30-40 percent mark. Nothing too positive would occur for the remaining five minutes, resulting in the final score being 72-61.

Robert Franks said this team needs to try and overcome adversity as they did when they went down to Arizona and got back on track.

“We have to overcome adversity as we did in the beginning of the season,” Franks said. “We just need to get back on track.”

You can catch the Cougars at Beasley Coliseum for the final time this season at noon on Saturday as they try and defeat Oregon State The game can also be found on the Pac-12 Network.