The Daily Evergreen • May 1, 2017 • https://dailyevergreen.com/5137/sports/kaepernick-does-not-need-football/

Kaepernick does not need football 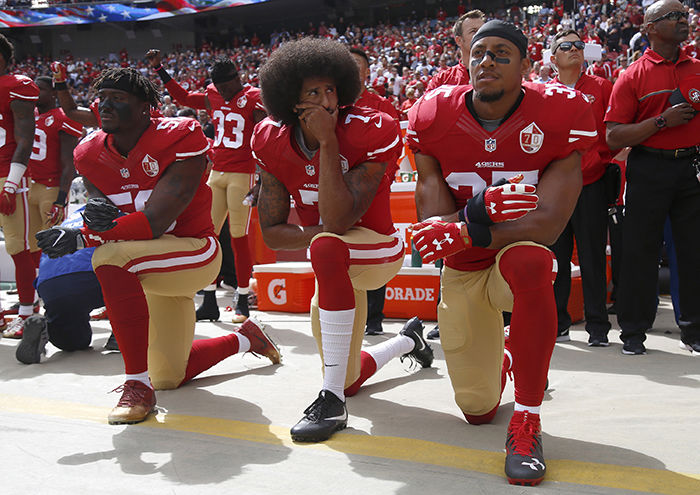 Former San Francisco quarterback Colin Kaepernick, center, and two teammates kneel during the national anthem in a game against the Dallas Cowboys on Oct. 2 at Levi’s Stadium.

People view him as either a hero or a degradation to heroes.

Colin Kaepernick ventured into the blender of sports and politics in August and, much like the few athletes who have gone there before, he did not come away unscathed.

In a preseason game on Aug. 14, Kaepernick made a firm decision to refuse to stand during the national anthem. After essentially shaving against the cultural grain, Kaepernick’s reason for protest was lost in society’s debate – some argue that it still is.

Last week, I had the privilege to sit down with David Leonard, an author and professor in WSU’s department of critical culture, gender and race studies (CCGRS).

In our interview, Leonard said people should not be hung up on the argument that Kaepernick was trying to disrespect American veterans, because that was not his intent.

“He’s been clear that the protest is not about veterans,” Leonard said. “His decision to kneel rather than sit, after meeting with Nate Boyer (a former NFL player and veteran) speaks to his intentions and his willingness to listen to others.”

Kaepernick is not protesting with the intention of devaluing the American military. If this were true, he probably would not have donated $50,000 dollars to Meals on Wheels as a part of a pledge he made to donate $1 million to various charities.

His donations should be considered selfless, considering the possibility that Kaepernick may never again wear an NFL uniform. The San Francisco 49ers released him in January and he has yet to sign with another NFL team.

Let’s not get off track though. The point of protesting the national anthem resides in the obvious social injustices that embrace America, not the men and women that serve this country.

For this, Leonard poses a simple question: what is the root of Kaepernick’s reason for protesting?

“The question is why [are] we listening to his protest rather than focusing on Colin Kaepernick’s methods?” Leonard said. “Might we look in the mirror and reflect on what he’s protesting?”

Kaepernick has no intention to stand for a song that implies that the oppression of black people is acceptable. Of course, we do not often hear the third stanza of the United States’ National Anthem, which promotes these still-existing forms of racial oppression.

This is the part in which author Francis Scott Key made clear that any black slaves in America who were looking for freedom were in the wrong.

Can you really blame Kaepernick for not wanting to support a song that is oppressive to black people? Slavery is outlawed, but racism remains. Any denier of this fact is practicing both ignorance and cognitive dissonance.

Kaepernick does not deny the existence of oppression, and that’s why Leonard and many others support his protests.

“Given the many issues facing our nation, given persistent racism, given the systematic devaluing of black life, I applaud Kaepernick for using his platform for the greater good,” Leonard said. “His courageous stance, his effort to foster conversation and introspective, and his willingness to give not only in kneeling but through his work within countless communities deserves praise.”

Many have compared Kaepernick’s protest to that of African-American athletes Tommie Smith and John Carlos in the 1968 Olympic Games. Smith and Carlos held their black-gloved fists in the air during a medal ceremony to protest the Civil Rights movement in America.

Today, Americans honor their protest, but 49 years ago, there was little honor. This is at least somewhat similar to Kaepernick’s protests.

Simon Licen, a sport management professor at WSU who is best known for his media appearances throughout international sport noted the comparison.

“A number of people have compared Colin Kaepernick’s protest to that of Tommie Smith and John Carlos.” he said, “My initial thought was that the comparison was exaggerated. In hindsight, the comparison between the two incidents might not be so exaggerated after all.”

Licen also noted that Smith and Carlos were banned from the Olympic Games, just as Kaepernick seems to be unofficially banned from the NFL. He said he views this practice as mostly unintentional.

“The ban is probably unintentional, as in, franchises see him as a potential liability rather than necessarily disagreeing with his stance,” Licen said.

On the other hand, Leonard said he sees this apparent ban as intentional.

“Given media reports about the hate and animosity directed at Kaepernick, given the fallacious claims that his protest would be ‘a distraction’ or ‘divisive in the locker room,’ and given, as Dave Zirin has written about, the conservative politics of NFL ownership, the questions about why he hasn’t been signed are real,” Leonard said. “Clearly, his politics and his protests against racism are shaping his free agency.”

Granted, Kaepernick’s on-field struggle has something to do with his long-standing free agency, but many believe there is more to the story, especially since the quarterback led the 49ers to three consecutive playoff appearances from 2012-2014 with a Super Bowl appearance in 2013.

Intentional or not, Leonard said Kaepernick does not “need” football, as what he is doing transcends any professional sport organization.

“He’s making it clear, in both words and action, that he doesn’t need football,” Leonard said. “That football doesn’t define him is another factor, as football culture demands ‘being all-in,’ playing without regard for self or one’s own identity.”