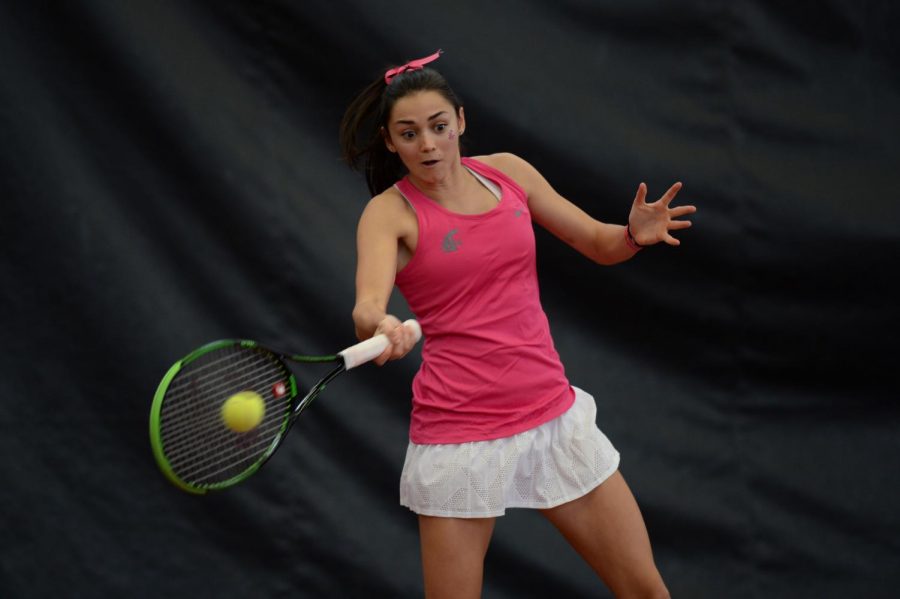 Junior Melisa Ates returns a ball during singles play against BYU on Feb. 22 in Hollingbery Fieldhouse. Ates won her match in straight sets.

No. 28 WSU tennis lost its conference opener 4-3 to Utah on Friday in Salt Lake City.

The close match started with doubles play where the Utes (8-2, 1-0) took two out of the three matches to grab a 1-0 lead.

Junior Melisa Ates quickly tied the match at 1-1 by winning her singles match in straight sets.

Senior Aneta Miksovska fell in straight sets in her match to allow Utah to regain the lead but senior Tiffany Mylonas evened the score at 2-2 with a 6-4, 7-6 victory.

With the Cougars’ (13-3, 0-1) backs against the wall, sophomore Michaela Bayerlova, the No. 38 ranked player in the nation, kept WSU’s hopes alive by rallying from a set down to win her match.

It all came down to freshman Hikaru Sato. Unfortunately, she lost in three sets and Utah claimed the 4-3 win.

Despite the close loss for Sato, Head Coach Lisa Hart was proud with how she carried herself under pressure.

“I’m proud of the way Hikaru handled herself in the final set with the match on the line,” Hart said. “Unfortunately, the result did not go our way, but we will get back to work tomorrow to improve.”

The Cougars will battle Colorado at 9 a.m. Sunday in Boulder before facing Fresno State at 1 p.m. Wednesday in Fresno, California.