WSU picks up first conference victory of season over Oregon 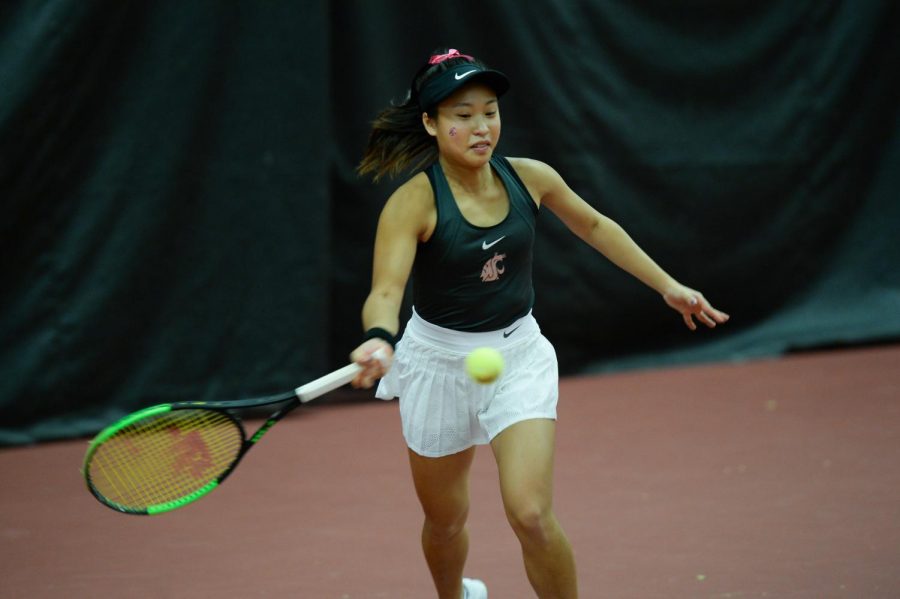 Freshman Savanna Ly-Nguyen returns a ball during singles play against Seattle on Feb. 22 in Hollingbery Fieldhouse.

Nearly a month after their last home match, No. 36 Cougar tennis returned to Pullman on Sunday and took down Oregon 4-1 to claim their first Pac-12 win this season.

Head Coach Lisa Hart said she was happy her team was able to grab their first conference victory of the year.

“I think our team has high expectations of ourselves,” Hart said. “I don’t think our players are satisfied yet, they’re looking for more wins.”

The match started with doubles play where junior Melisa Ates and freshman Yang Lee, the doubles pairing ranked No. 71 in the nation, had no trouble sealing the deal on court two, winning 6-2. Senior Aneta Miksovska and sophomore Michaela Bayerlova edged out the Ducks (6-9, 0-4) in their match to secure the doubles point for the Cougars (15-4, 1-2) and give them a 1-0 lead.

In singles play, senior Tiffany Mylonas claimed a straight-set victory to give WSU a 2-0 lead.

Oregon battled back as freshman Savanna Ly-Nguyen fell in three sets in her match, allowing the Ducks to pull within one point of the Cougars.

Bayerlova, the No. 38 ranked player, took on Oregon senior Shweta Sangwan, the No. 87 player, and grabbed a 6-0 first set win to maintain her home-court advantage.

Bayerlova would lose the second set 6-2, leading to a decisive third set. Cougar fans rang their cowbells, and players on both sides cheered from the sidelines as the battle on court one came down to the end.

“I lost a little bit of my game and in the third set it was open [and] we both played really good,” Bayerlova said. “We had some close games, points, everything. It was a good fight.”

The attention turned to freshman Hikaru Sato who had the opportunity to clinch the victory for the Cougars. Sato battled back after dropping the first set to top her opponent and secure the 4-1 WSU win.

The Ducks’ energy was strong throughout the match but the Cougars were too tough to take down as WSU improved to 5-0 at home this season. Oregon has lost six consecutive matches.

The Cougars stay at home to battle Boise State at 10 a.m. Saturday inside Hollingbery Fieldhouse.