Cougars fall to Sun Devils by one run for second straight day, strand 16 runners on base in road loss Sunday 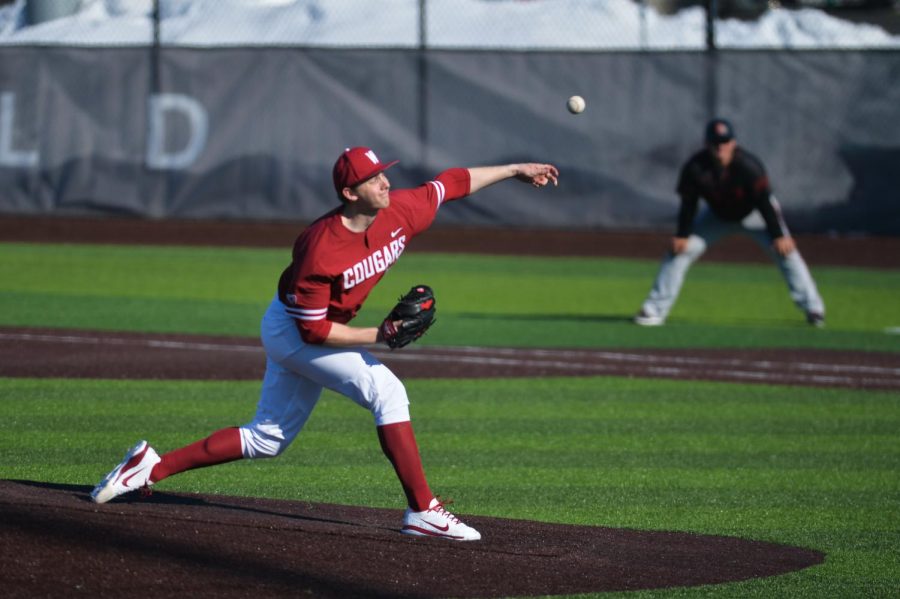 The Cougars (6-13, 0-3) loaded the bases with one out in the ninth inning but were unable to bring the tying run across the plate as the team fell to the Sun Devils (19-0, 3-0) by one run for the second straight day.

Arizona State is the only remaining undefeated team in Division I as they swept WSU in the three-game series, beating them by a combined 19-12 in the contests.

The Cougars lineup looked a little different Sunday in hopes of sparking offense early which has often been a struggle this season.

It paid off, as sophomore outfielder Collin Montez hit a rocket to right-centerfield to score freshman infielder Kyle Manzardo and grab a 1-0 lead in the first inning.

Sophomore right-handed pitcher Hayden Rosenkrantz started on the mound for the fifth time this year as he made quick work of a dangerous Sun Devils lineup in the first.

WSU seemed to feel comfortable at the plate and were reaching base frequently in the early parts of the game but couldn’t get anything going in the second inning.

A costly error in the bottom of the second inning from freshman outfielder Koby Blunt allowed the runner from second base to score. Then an RBI double gave ASU a 2-1 lead.

The Cougs bounced back in the third with a two-run single from Manzardo to grab a 3-2 lead. A couple of mistakes running the bases prevented WSU from scoring more than two runs.

Rosenkrantz got into trouble with a bases-loaded, two-out jam but limited the damage to just one run. Unfortunately, that tied the game up at three.

WSU loaded the bases for the second time of the day in the fifth inning with two outs, but Blunt struck out after battling the pitcher to a full count.

Mills got into trouble in the bottom of the fifth, allowing the first two runners on base and giving up a run. This forced Head Coach Marty Lees to take him out as ASU now led 4-3.

The Sun Devils tacked on two more runs in the sixth and the momentum was definitely in their hands as they increased their lead to three.

Senior infielder Andres Alvarez got the Cougs back in the game in the seventh after scoring on a wild pitch and freshman infielder Kodie Kolden grounded out to bring a run across. WSU narrowed the Sun Devils lead to one run.

WSU loaded the bases again in the top of the ninth with one out but the next two hitters would strikeout to secure the win for ASU.

The Cougars had 11 hits in the game and left 16 runners on base.

The team gets a few days off before it heads south to face University of California Irvine at 6 p.m. Friday for a three-game series.